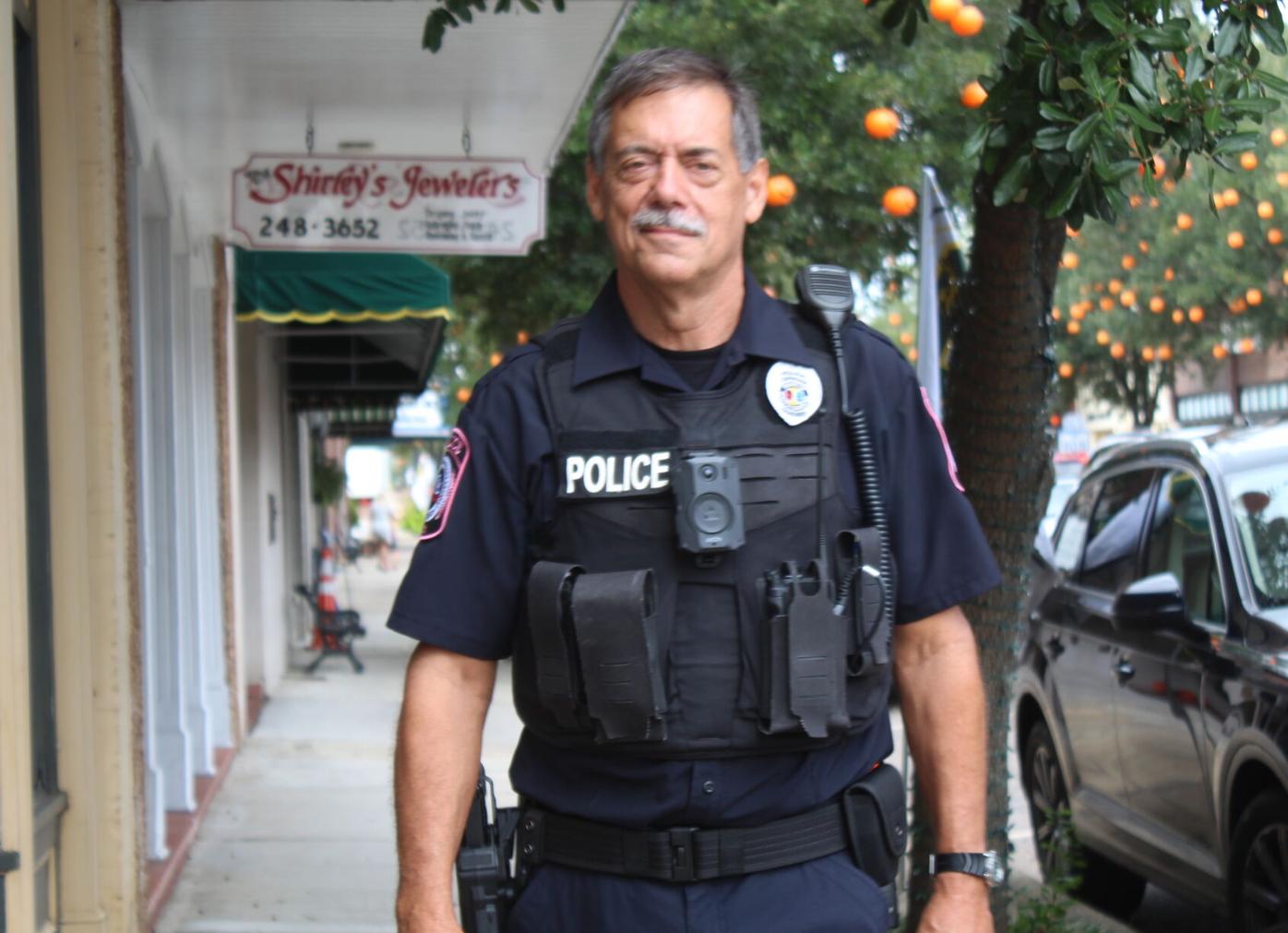 Wayne Calhoun hopes his constant strolls around Downtown Conway will make him accessible and keep everyone feeling secure. 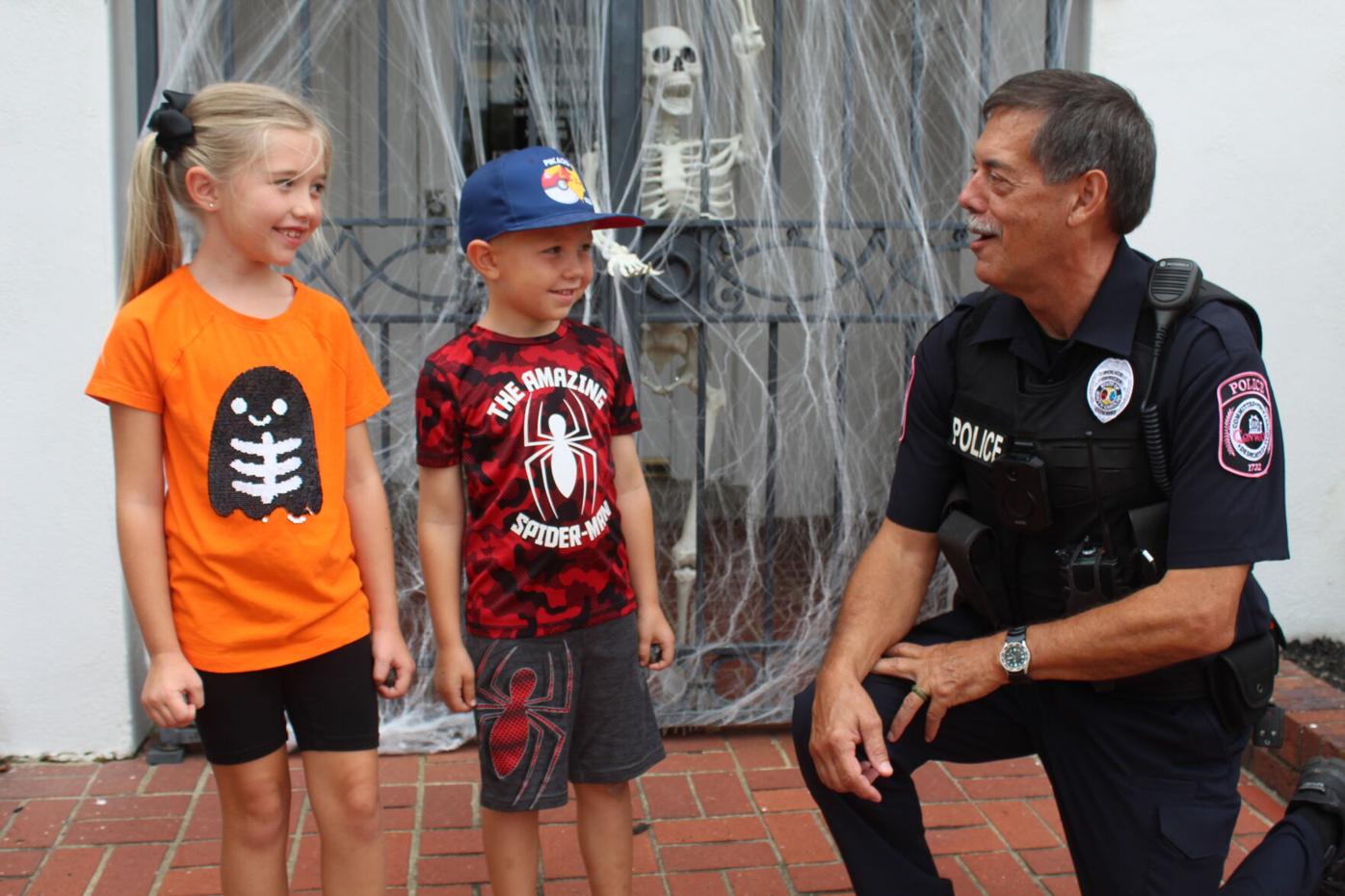 New Downtown Conway police officer Wayne Calhoun stoops to visit a minute with Eden and Bobby Weis, who were downtown with their mom enjoying the fall decorations. The children walked away with courtesy police badges.

Wayne Calhoun hopes his constant strolls around Downtown Conway will make him accessible and keep everyone feeling secure.

New Downtown Conway police officer Wayne Calhoun stoops to visit a minute with Eden and Bobby Weis, who were downtown with their mom enjoying the fall decorations. The children walked away with courtesy police badges.

Conway native Wayne Calhoun was driving a tractor on an Horry County tobacco farm when he was only 6-years-old.

Now more than six decades later his work ethic and his desire to help people are still going strong.

When it’s time to stop, he said, “I’ll stop.” But he hopes that isn’t any time soon because he’s just begun a job that he’s truly enjoying.

Calhoun is the Conway Police Department’s new downtown officer, walking the streets daily believing that a strong police presence will keep everyone safe.

“I don’t live in the city, but this is my hometown…I’m at the stage of life when I wanted to give back to the city, the chance to give back even more. I think the older we get, we quit thinking about self and we start thinking about others more. I have because I’ve got grandkids and I want it to be a better place for them,” he said.

To be exact, he’s got a wife, three children and five grandchildren.

Wayne worked for 15 years with Horry County Fire Rescue, then worked at other jobs a while before deciding he wanted to put in enough years to draw state retirement so he landed a job at the Horry County Detention Center.

He stops to emphasize, contrary to what some people might think, that innocent people are at times among the jail’s population.

After working at the jail and then spending seven years at the Gun Depot on U.S. 501, he definitely knows weapons, but said fortunately he’s never had to use one. (He did not carry a gun at the jail.)

But what really got him interested in community policing was participating, about three years ago, with members of his church in the CPD’s Citizens Police Academy.

“That’s what sparked a lot of the interest. We had to ride 20 hours with the policeman, and I think I ended up riding about 60 because I enjoyed it so much,” he said. “These guys are out there everyday putting their lives on the line. I don’t see what I’m doing like putting my life on the line like they do.”

It took Calhoun about two and a half months to go through all the training he needed to be the downtown officer. He watched 181 hours of videos. That took about five weeks. Then he went to Columbia to take a written test and receive instruction in defensive tactics and weapons retention.

Then he went to Myrtle Beach to qualify with a pistol and be tested on his defensive tactics. The next step was two weeks of riding along with an officer for on-the-job training.

He actually started his new job on a Monday and had already walked about two and a half or three miles each day by his fourth day on the job.

He hoped to have met all of the merchants by Friday, but admitted that because he’s a native of the area he already knew many of them.

In the future he plans to walk and, at times, ride in a golf cart. In addition to his regular downtown duties, he will be expected to help during the Christmas, Homecoming and Halloween Golf Cart parades, Riverfest, the Reindeer Run, the Ghost Walk, in city court and at Conway City Council meetings. On his first day of work, he was already scanning people entering a council meeting.

Calhoun says his return to the city has definitely been a pleasant one. He rates the morale of city employees high, and says Conway’s businesses are glad to have someone in their vicinity full time.

He says visitors to the downtown area have also been upbeat. They like the pumpkins in the trees, the witches beside City Hall and the cobwebs on the bushes at City Hall.

One of the things he and some of the merchants want to see grow is the nascent Merchant Watch Group that will work in downtown the same way Community Watch Groups work in Conway’s neighborhoods.

“I just want the day that I leave for everybody to say, ‘You did a good job. He did well for the city.’ This is something that has always been in the back of my mind…The job came open at the right time and I decided to give it a chance. I got through the background check and everything. I tell you it’s been one pleasant experience after another,” he said.

Calhoun’s office is in the small building facing Main Street beside the Conway City Hall. To contact him in an emergency, call 911. If it’s not an emergency he says people can just flag him down as he walks by.

As for his first few days on the job, he said, “I’m loving it so far. I’m hoping it’s going to stay just like it is.” family:"Times New Roman"; mso-bidi-theme-font:minor-bidi; mso-fareast-language:JA;}div.WordSection1 {page:WordSection1;}