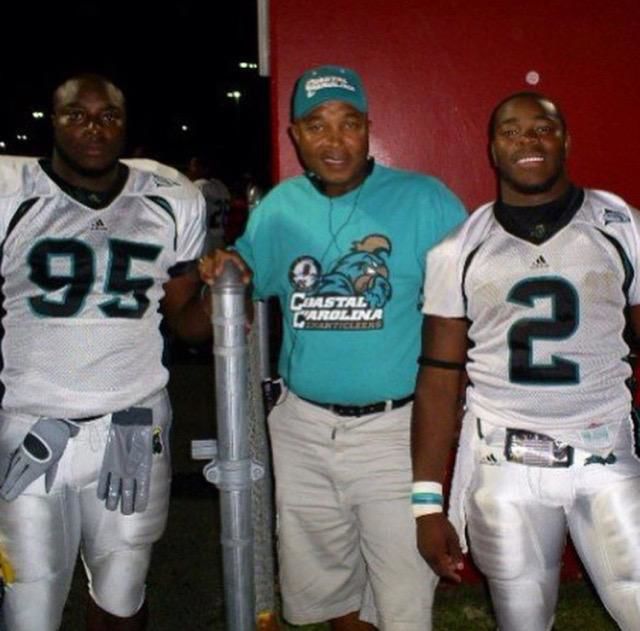 Kerebi Gause, left, Racheed Gause, right, pose with their father during their playing days at Coastal Carolina University. They and four other members of their family represented Conway in the Shrine Bowl of the Carolinas. 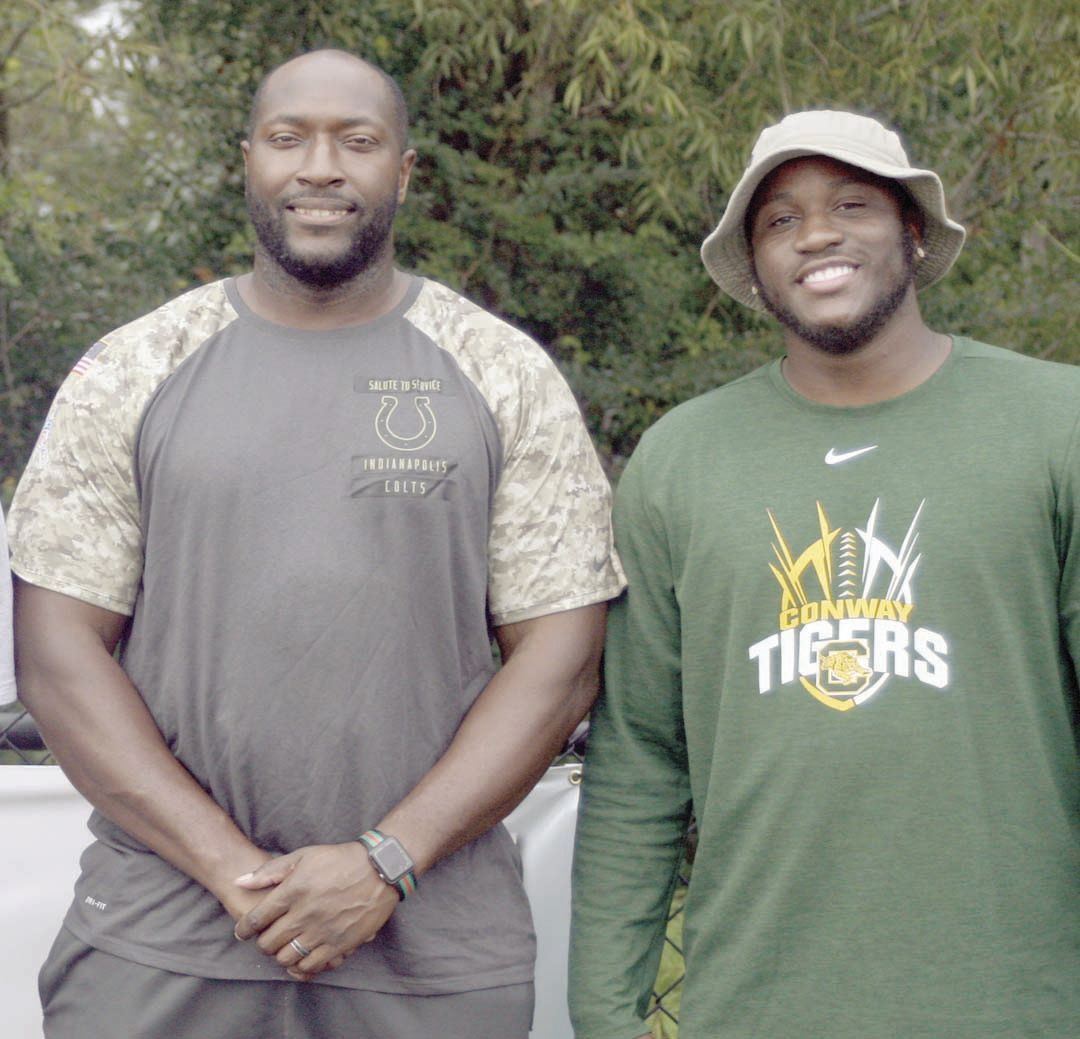 Right, George Gause and junior Hemingway are first cousins and members of a Conway High School family that has sent six players to the annual Shrine Bowl Game of the Carolinas.

Kerebi Gause, left, Racheed Gause, right, pose with their father during their playing days at Coastal Carolina University. They and four other members of their family represented Conway in the Shrine Bowl of the Carolinas.

Right, George Gause and junior Hemingway are first cousins and members of a Conway High School family that has sent six players to the annual Shrine Bowl Game of the Carolinas.

There may be high schools in South Carolina that have sent more athletes to the annual Shrine Bowl Game of the Carolinas, but it’s doubtful anyone has produced more Shrine Bowl players than one Conway High School family.

When Tonka Hemingway travels to Spartanburg for the 2019 Shrine Bowl Game later this month, he will be the sixth member of his family to participate in the prestigious event.

According to the 18-year-old, he and his brother Junior and their cousins always joke and cut up when they’re together.

Hemingway’s brother, Junior, participated in the big game his senior year before heading off to the University of Michigan. After exhausting his eligibility at Michigan, Hemingway played for the Kansas City Chiefs in the NFL.

The younger Hemingway has a picture with his older brother that was made at the Shrine Bowl Game in 2006 when he was 12-years-old.

Junior Hemingway has told his younger brother what to expect in Spartanburg.

“He told me they’ll feed us well and to have a good time,” Tonka Hemingway said. “I look forward to meeting new people, visiting the kids at the hospital and seeing what the Shrine Bowl is all about.”

This time, it will be the older brother sitting in the stands cheering for his younger sibling.

Also, two other members of the family, Duran Lawson and Erskine Johnson represented Conway in the annual North-South All-star Game.

“Being in the Shrine Bowl of the Carolinas helped put my athletic career in perspective,” Racheed Gause said. “Visiting the Shriner Hospitals where kids are less fortunate was really an eye opener. Sharing moments with them will forever be planted in my memory. They would love to get out and play any sport and they looked at us as role models. Also hanging out with and joking around with Ricky Sapp, Clifton Geathers, Stanley Taylor and D.J. Moore was always fun. Those guys were clowns and made the stay in Spartanburg worth it.”

Gause also has fond memories of growing up in Bucksport.

“Our family has always been athletic and competitive,” Racheed Gause said. “Growing up in Bucksport, we had plenty of fields and yards where we could go around the neighborhood challenging other kids to sports. Andrea, George, Kerebi and myself always would be on the same team. We would dominate other kids to the point it wasn’t fair. Growing up watching Andrea and George made Kerebi and me want to follow in their footsteps. It was like we had to succeed then to prove ourselves.”

According to Andrea Gause, who played at the University of South Carolina and operates a cleaning service in Columbia, the family is proud of its accomplishments. He said their parents taught all of the boys the importance of working hard, staying the course and never giving up.

“We give each other a hard time, but the reason we do it is to keep each other motivated,” he said. “The older that I get, just to understand what my brothers and my cousins accomplished makes me feel special. Getting scholarships and going to college and following the trend we set makes me feel really good.”

Tonka Hemingway, who plans to sign with the University of South Carolina during December’s early signing period, will be the eighth of the boys to play college football.

In addition to Andrea, George Gause played at USC, Racheed Gause and Kerebi Gause at hometown Coastal Carolina University, Lawson at The Citadel and Johnson at South Carolina State.

Several members of the family are involved in coaching.

Several members of the clan have budding athletes within their own families.

George Gause has two children including a young son named George Gause III, who participates in a couple of sports at the Conway Parks and Recreation Department.

George Gause has fond memories of his days at CHS and USC as well as NFL stints with the Indianapolis Colts and Denver Broncos.

“I’m proud of making the NFL,” he said. “I always wanted to make it. I didn’t stick around as long as I wanted, but I made it.”

Andrea Gause has three boys and two girls and all of them participate in either athletics or cheerleading.

All of the brothers and cousins are successful in their own right.

Lawson owns and operates a Zaxby’s franchise in Northern Virginia. Johnson lives in Atlanta, Ga., and is an actor with Aligned Stars Agency.

George Gause lives and works in Conway. Kerebi Gause is a technician at Nephron Pharmaceuticals Corporation in West Columbia.

Andrea Gause believes playing in the Shrine Bowl will be an experience Tonka Hemingway will never forget.

“The highlight for me was vising the kids at the Shriner’s Hospital and having an opportunity to spend time with them,” he said. “We spent a lot of time with those kids.”

Gause also enjoyed meeting players from all over the state and having an opportunity to form bonds and become friends with many of them.

For his part, Tonka Hemingway hopes there is a lot of football remaining to be played. He has big plans for his career with the Gamecocks and beyond.

“I want to play in the NFL,” he said. “It will take a lot of hard work and dedication.”

One of Hemingway’s Shrine Bowl teammates will be Myrtle Beach quarterback Luke Doty, who has also committed to play at USC.

The question of who is the best athlete in the family is debatable.

“That’s a real question everyone wants to know and that particular question sparks a lot of conversation within the family,” Racheed Gause said. “I would have to say each one of us had a unique set of skills that made us really good at our positions, but one thing we all had in common was speed and quickness.  Andrea was the speedster who broke ankles weekly and had the return ability on special teams similar to Peter Warrick.

“George has the size and speed and athleticism like Julius Peppers to beat you off the ball and beat you around the corner to sack the quarterback or stop any outside run play.  Kerebi has the power and strength, plus speed, to push the center into the quarterback before he hands the ball or gets to his three to five-step drop similar to Warren Sapp. Kerebi was a dog on the field that centers and quarterbacks were scared of.

“I had speed, size, power and knowledge to play any position on defense and play running back. I modeled my running style to Jerome Bettis.  It’s hard to say who was better because we all played differently and played to our body types.”

Gause believes he and his family inspired not only each other, but also many other kids in the community.

“Coming from Bucksport, I believe we gave a lot of kids hope and motivation to do what was natural to them and participate in football, track and basketball. At the time we didn’t know football would take us to where we are today in life.

“The lessons that were taught and instilled in us from Coach (Chuck) Jordan and his staff would be lessons we will never forget. Football is a lot like life.