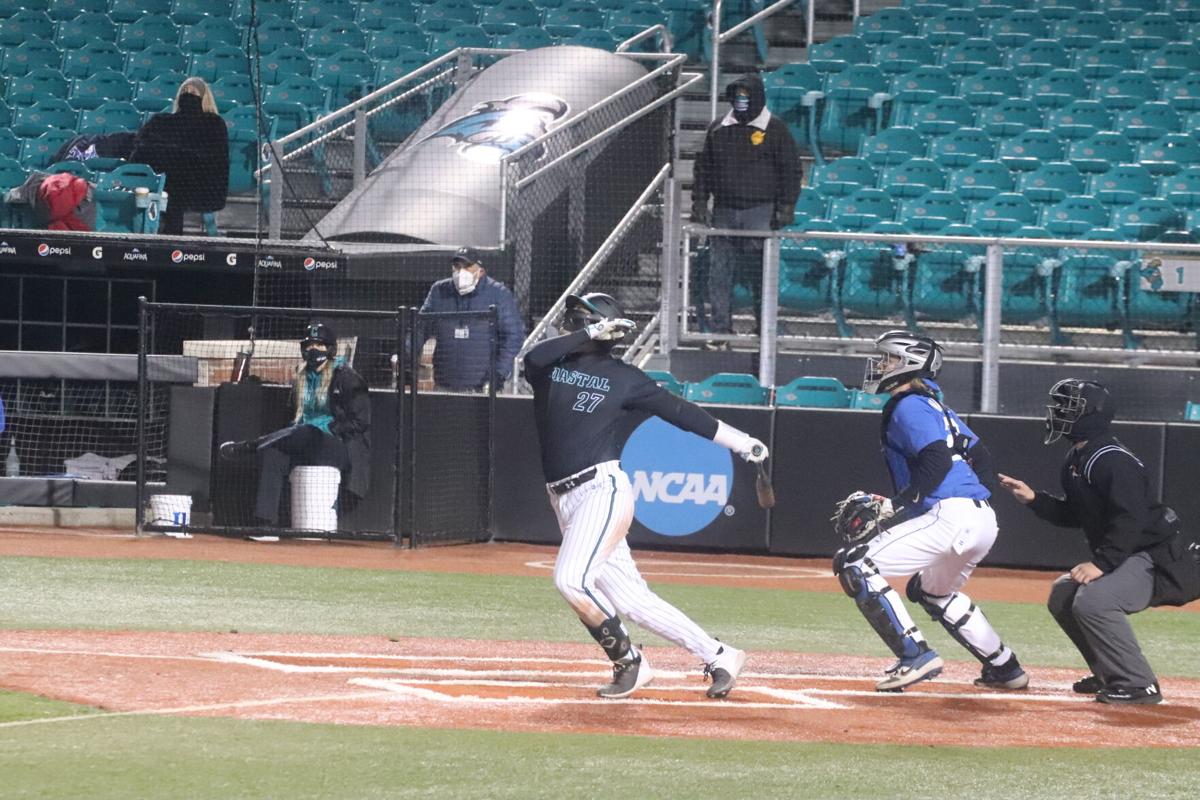 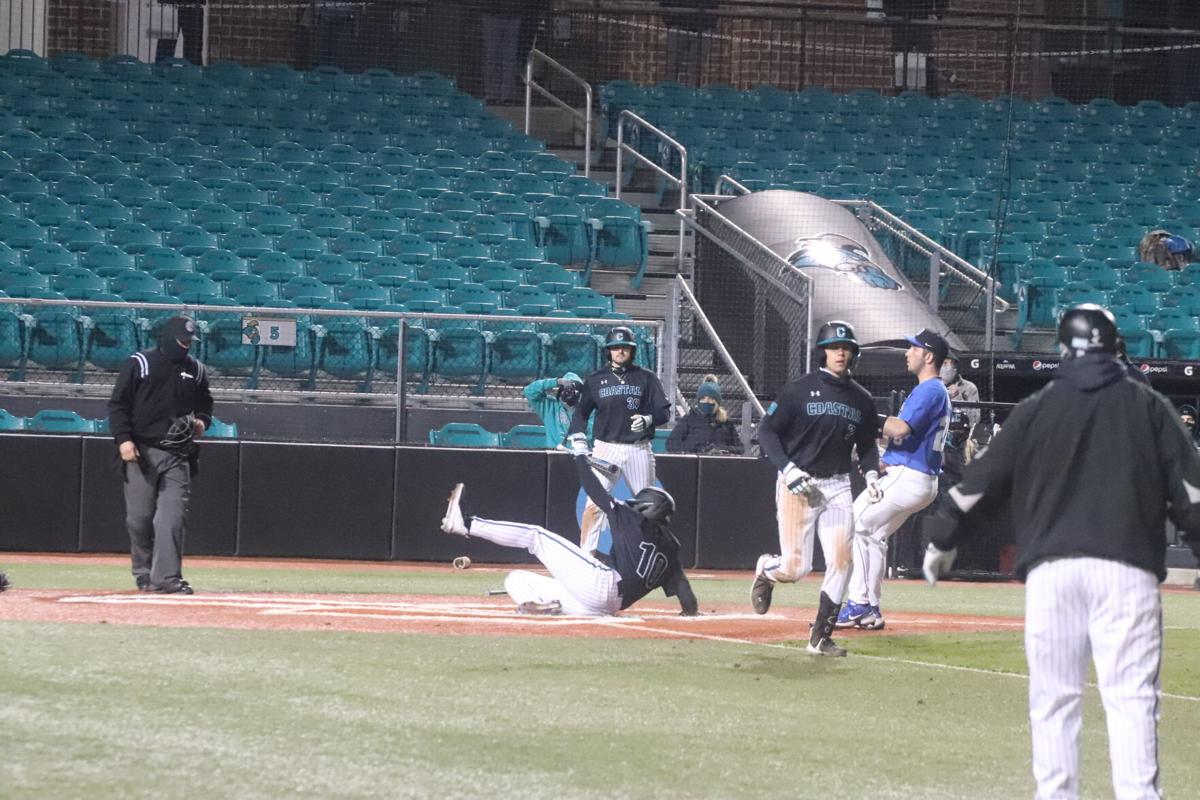 Billy Underwood scores on a passed ball to help the Chants cut the deficit to one in the bottom of the ninth inning against #16 Duke Sunday night. Coastal would fall 10-9 to the Blue Devils to drop to 1-2 on the year. Photo by Ian Livingston Brooking.

Billy Underwood scores on a passed ball to help the Chants cut the deficit to one in the bottom of the ninth inning against #16 Duke Sunday night. Coastal would fall 10-9 to the Blue Devils to drop to 1-2 on the year. Photo by Ian Livingston Brooking.

For the first time since 2014, Coastal Carolina lost an opening weekend baseball series, dropping two of three games to the No. 16 Duke Blue Devils.

Coastal fell 12-4 on Saturday. Duke’s 12 runs were the most the Chanticleers had allowed in a season opener since losing 21-8 to North Carolina in 1998.

The two teams split Sunday's doubleheader and both of the games were close.

In the first contest, the Blue Devils and the Chants traded runs early and the score was knotted 3-3 at the end of the third inning. Senior Alex Gattinelli had 2 RBIs early, including a solo homer in the bottom of the second inning.

It became a pitchers' duel for much of the game as junior Nick Parker and junior Reid VanScoter had decent outings. Parker struck out four over five innings while VanScoter fanned one over three. Duke’s Luke Fox was exceptional on the mound, allowing just one hit over three innings.

It then came down to the ninth. Duke put up four runs to take a 7-3 advantage going into the bottom of the frame.

Nick Lucky cut the deficit to three after driving in Lorenzo Morello. Eric Brown walked and up stepped Parker Chavers. On the tenth pitch of the at bat, Chavers launched the ball to deep left, ending the game with a walk-off grand slam.

“He’s the only guy we wanted up there in that situation,” Coastal head coach Gary Gilmore said. “I guarantee every guy on our team wanted him at the plate.”

Not only was it Chavers’ first hit of the year, it was his first hit since the NCAA regional game versus Florida A&M on June 1, 2019. Before the 2020 season was canceled due to the COVID-19 pandemic, Chavers was sidelined with an injury.

After getting his first hit in 632 days, Chavers said the walkoff was a “special moment.”

Going into the final game Sunday, it looked as if Coastal was going to run away with it early, scoring five runs in the first inning.

Chavers continued his hot streak, starting off the game with an RBI single and the runs just poured in afterwards.

Duke responded quickly as Erickson Nichols hit a three-run shot to left field to make it 5-3. An RBI triple would cut the lead to one at the end of the second inning.

Nichols would hit an RBI double in the third inning to give the Blue Devils a 6-5 lead. And with a Nichols' sacrifice fly to right field, suddenly Coastal found themselves trailing 7-5. Nichols finished his night with six RBIs for the Blue Devils.

Going into the seventh inning, Coastal was trailing 8-5. Gattinelli doubled to left center to drive in two runs and catcher Tanner Garrison was hit by a pitch with the bases loaded to tie things up at 8. But Coastal left all three runners stranded and Duke would capitalize in the following inning, scoring twice to make it 10-8.

It looked as if lightning was going to strike twice at The Palace Sunday night as Weiss walked, bringing in a run to make it 10-9 with no outs. Dale Thomas reached first on a fielder's choice, hoping to bring in Makenzie Pate. But Pate was thrown out at home, keeping the score 10-9.

Despite having the winning run on first base, Garrison and Morello both struck out and Duke staved off another Coastal comeback.

“After Saturday’s less-than-stellar performance, to come out and compete today the way they did, I was proud of the kids,” Gilmore said. “It didn’t work out the way we wanted to in that second game. We will keep getting better.”

One thing the club will need to work on going forward is fielding. In their three games this weekend, Coastal committed 11 errors, the most since dropping their 2014 opening weekend series against Pittsburgh. They committed 10 errors during that series.

“Being very honest, I’d say at least nine were about simple errors. They weren’t tough plays,” Gilmore said. “I think we just continue to try and coach them up and we’ll see. If I have to go to a more established defensive team and play less offensively, then there’s some moves I can make.”

Coastal will have a day off on Monday before traveling to Wake Forest Tuesday afternoon.

It will be another ranked match up for Coastal as the Demon Deacons are No. 17 in the nation. That game is scheduled for 4 p.m.

Coastal will return home next weekend for the CCU Baseball Tournament. They will face Bryant on Friday 4 p.m.

The Chanticleers will face off with the Mountaineers of West Virginia on Saturday at 4 p.m.

Coastal will finish off the weekend with a 3 p.m. showdown against Kennesaw State. All Coastal home games can be viewed on ESPN+.