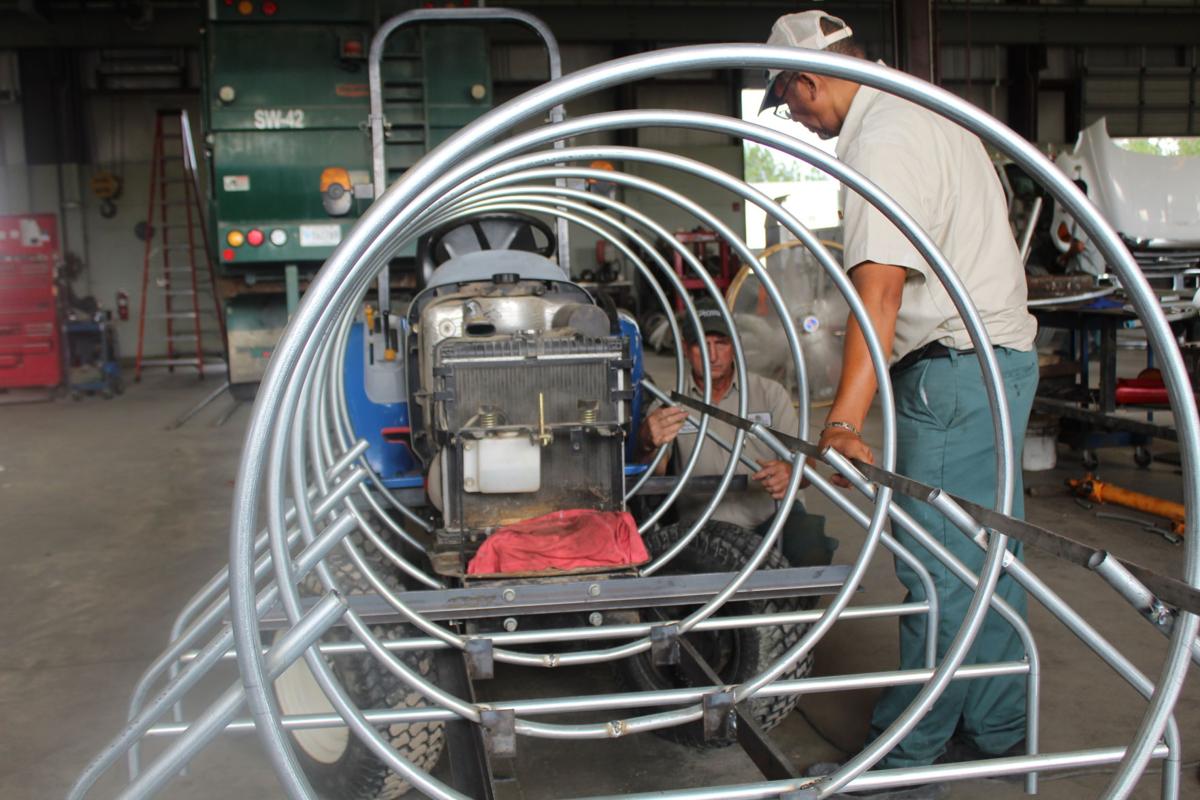 Darrell McDowell and Timothy Patrick were busy Friday creating a train for children to ride at this year's Celebration of Lights. 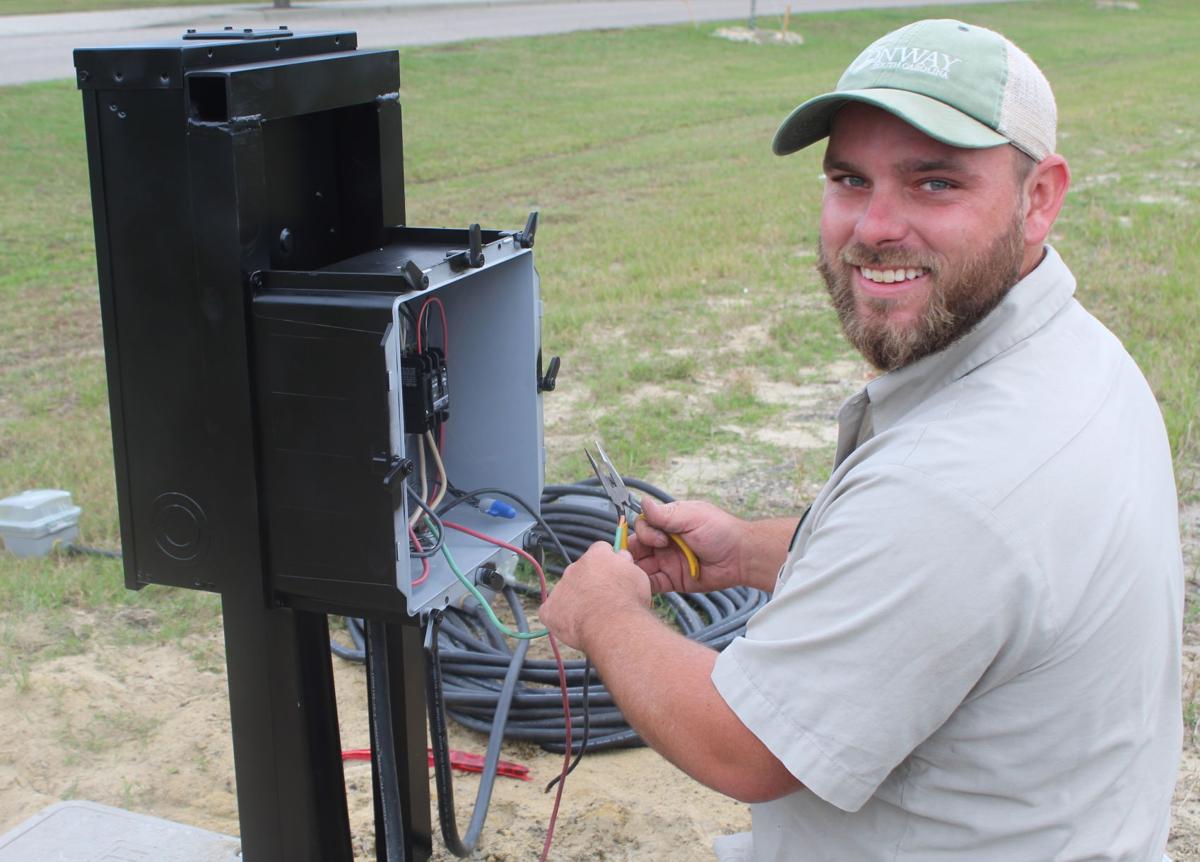 Gavin Rowe concedes that his job preparing for this year's Celebration of Lights is definitely not a highly-social job, but he just enjoys doing electrical work. 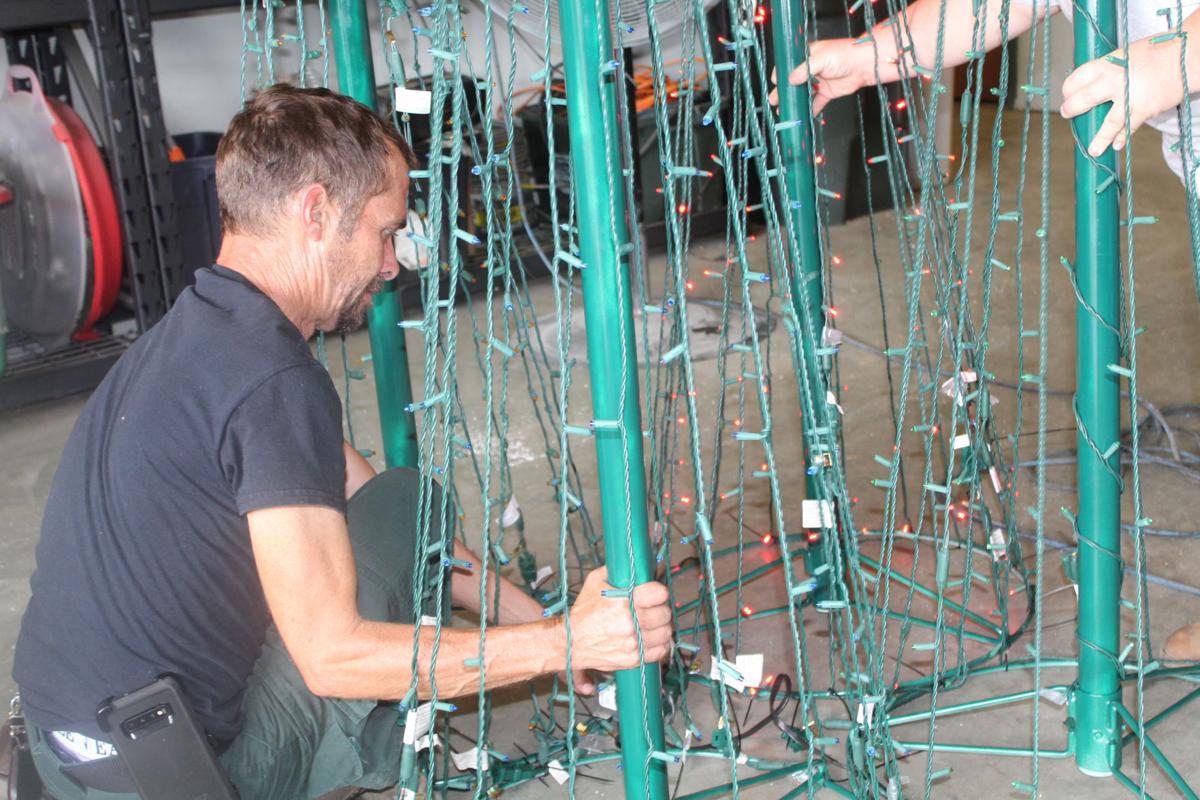 Darrell McDowell and Timothy Patrick were busy Friday creating a train for children to ride at this year's Celebration of Lights.

Gavin Rowe concedes that his job preparing for this year's Celebration of Lights is definitely not a highly-social job, but he just enjoys doing electrical work.

Despite its being almost two months until Christmas, the yuletide spirit was flowing Friday among employees of Conway’s Grounds and Maintenance Department, who are determined to make this year’s Celebration of Lights bigger and better than ever.

The show opened three years ago to rave reviews and a steady stream of traffic, but attendance was off a little the next year due to minor flooding that caused some problems with the lights.

And then this past year, Hurricane Florence left overwhelming floodwater in its path canceling the show, and much of the electrical network that lit up the show was destroyed.

Gavin Rowe, facilities maintenance technician, is working to make sure there is no repeat of that.

“We’re planning on it being bigger and better this year. It’s just a process that we have to go through to get everything prepared,” he said as he trimmed and connected wires in one of about eight subpanels.

Rowe also concentrated on making sure the electrical system was powerful enough for the show to add more lights this year and every year after this.

The electrical system will be ready sometime this week, according to Rowe.

He said it was his job to get the power to the site and now it’s other people’s jobs to plug into the receptacles and “make the lights happen.”

In addition to more lighting, this year’s show will have more fun for kids.

When they flip the show’s lights on, the Shoo-fly train, or something that looks similar, will chug onto the scene, thanks to Darrell McDowell, who got his experience building trains when he built one for Vacation Bible School at Hickory Grove Baptist Church.

He was busy Friday afternoon creating his second train using a tractor for its power. Children will be able to climb into a trailer hooked to the train for a “hayride” sort of ride.

McDowell was doing a lot of measuring Friday, then cutting wires and forming them into large circles for the train’s engine. He is basing his train on the Shoo-fly as it’s shown on the mural in Kingston Park.

“It’s not too hard,” McDowell said. “It just takes time.”

He plans to wrap the front of the train in metal and the back will be wood.

The train will include “a whistle and smoke and everything when we get it going,” he said.

There will also be red to resemble fire in the engine and a cow kicker on the front.

James Floro, Robert Bauman and Nicholas Pruett were painting the gingerbread house that greets motorists when they enter the show. The plan this year is to have people go around both sides of the “house” with guests paying cash on one side and those paying with bankcards on the other side. Organizers expect this to speed up the admissions process.

Still another crew, including Corina Goodson and Gene Paul, was working with lights that formed colorful Christmas trees, using old metal that the city already owned.

Grounds and Maintenance Director Timmy Williams, who has been planning and overseeing much of the work, said it’s going to be a whole lot different this year than it was in the past.

The show will follow the same path it has since the beginning, running along Marina Drive to Elm Street to the Conway Marina, around the marina parking lot and back up Elm Street to Laurel Street, where there will be s’mores and hot chocolate with periodic visits from Santa.

“After this year, every year it’ll get bigger and bigger is what we’re trying to make it,” Williams said.

If the weather holds up and no employees are out, he thinks the show will be 100 percent or close when it opens Nov. 29.

Lights were already on the base of the trees at the Laurel Street site of the old Conway Police Department Friday, but Williams wants more in the tops, and this year he plans to have them dangle down in streams in the fashion of a weeping willow tree.

Because the tennis center is currently not there, he and his crew plan to fill that entire area with something, but they were still working on that idea Friday.

They also envision some “dancing lights”. They also plan to have the ball lights hanging from the trees again.

Some of the familiar displays of gingerbread men and houses, a steamboat at the marina, a candyland house and more are already in place along the light route.

“I think they’re going to be surprised compared to what it was in the past,” Williams said of people who come to see this year’s show.

His department has been trying to do everything in-house, which he thinks is possible because they had all the materials they needed already on hand.

Williams has come up with many of the ideas they’ll implement this year by scouring the Internet looking at light shows all over the country.

Williams said he wishes now that his department could have started working on the show around the first of August, but they couldn’t due to a heavy schedule of tree planting, a park opening and more, but they won’t be deterred.

“With the staff that I got, with the motivation. I think we gonna have it. It’s gonna look good,” he said.