The owner of the Sky Bar in North Myrtle Beach has enlisted lawyers with the American Civil Liberties Union in a suit against the city of North Myrtle Beach that seeks to end enforcement of a noise ordinance which criminalizes music with certain lyrics.

Michael Moshoures said in a lawsuit that the city’s noise ordinance has caused his nightclub to lose both customers and revenue.

“The First Amendment protects free speech, including musical expression,” said South Carolina ACLU staff attorney Meredith McPhail in a news release. “Under our Constitution, the government can’t regulate protected speech just because they don’t like it.”

The ordinance in question states that between 7:01 a.m. and 10:59 p.m. it’s illegal for anyone to use sound equipment to broadcast sustained or repetitive noise into the public that rises above 80 decibels when measured from the property line. From 11 p.m. to 7 a.m., the threshold goes down to 60 decibels. Those restrictions apply to all music being broadcast using sound equipment.

The city uses a more restrictive scale when regulating music with language it deems “obscene,” “profane” or “vulgar.” In those situations, the ordinance all but bans the targeted language before 11 p.m. and severely restricts it after 11 p.m.

Music played at 30 decibels is akin to a whisper, or leaves rustling in a rural area, according to the ACLU.  During that same time of day, the ACLU points out, music that’s not allegedly “vulgar” “profane” or “obscene” can be played at 80 decibels, which is 32 times louder than 30 decibels and about as loud as heavy traffic or a lawnmower.

“In so doing, the City has trampled on the firmly rooted freedoms of speech and expression preserved by our federal constitution,” the complaint states. “Because this ordinance is a presumptively unconstitutional content-based abridgment of free speech, criminalizes fast swaths of protected speech, and is so vague that it promotes discriminatory enforcement, it must be struck down.”

The ordinance defines profane as “to treat with irreverence or contempt, crude, filthy, dirty, smutty, or indecent” and vulgar as “making explicit and offensive reference to sex, male genitalia, female genitalia or bodily functions.” But both vulgarity and profanity are protected forms of speech under the First Amendment and cannot be treated differently than other types of music.

The city defines “obscene” as a “description of sexual conduct that is objectionable or offensive to accepted standards of decency which the average person, applying North Myrtle Beach community standards would find, taken as a whole, appeals to prurient interests or material which depicts or describes, in a patently offensive way, sexual conduct or genitalia.”

But even music that has sexually explicit lyrics and appeals to a prurient interest inherently has artistic value – and often political value, and a federal appellate court ruled in 1992 that “because music possesses inherent artistic value,” music alone can’t be found to be obscene.

“By prohibiting what they deem offensive music, even played at low volumes, the City of North Myrtle Beach criminalized substantial amounts of protected speech,” the ACLU said in a news release. “The United States Supreme Court has explained that ‘music is one of the oldest forms of human expression’ and has held that ‘the Constitution prohibits any … attempts’ to ‘censor musical compositions to serve the needs of the state.’ Additionally, the amended ordinance is vague and places the task of determining whether conduct is criminal - versus merely unpopular - entirely within the discretion of law enforcement.”

The city of North Myrtle Beach never provided a list of words or lyrics that would violate its ordinance, and Mayor Marilyn Hatley previously told MyHorryNews that identifying “vulgar” lyrics is “common sense. I think all of us know what vulgar language is.”

While the city has cited the innocent ears of children as the motivation behind the law, the Supreme Court has ruled that governments can’t treat vulgar or profane speech differently than other types of speech merely because it’s in public and minors could hear it.

The Sky Bar on North Myrtle Beach’s Main Street plays hip-hop, rap and Top 40 music, and Moshoures said in the complaint that his customers come to his club expecting to hear such music that often contains profane or sexually explicit lyrics.

The Sky Bar was ticketed multiple times under the city’s old noise ordinance, the lawsuit says, and the club has received several warnings under the new law.

“On more than one of those occasions, the police entered Sky Bar ‘like a SWAT team,’ force the DJ to stop the music, and turn the lights on,” the lawsuit states. “Each time this occurs, Sky Bar loses customers and revenue.”

“That difficulty, along with the frequent warnings, has put a strain on the DJs who work at Sky Bar,” the lawsuit states. “In at least one case, a DJ has decreased the frequency he is willing to work at Sky Bar as a result. At present, Mr. Moshoures’ First Amendment right to play music for his patrons is under attack. He must either acquiesce to an unconstitutional city ordinance or risk criminal prosecution under the North Myrtle Beach City Code.”

Moshoures in his suit asked the court to declare that the ordinance violates the first and fourth amendments, to enjoin the city and its agents from enforcing the ordinance and to award him attorney’s fees, costs, and any other relief that the court “deems just and equitable.” 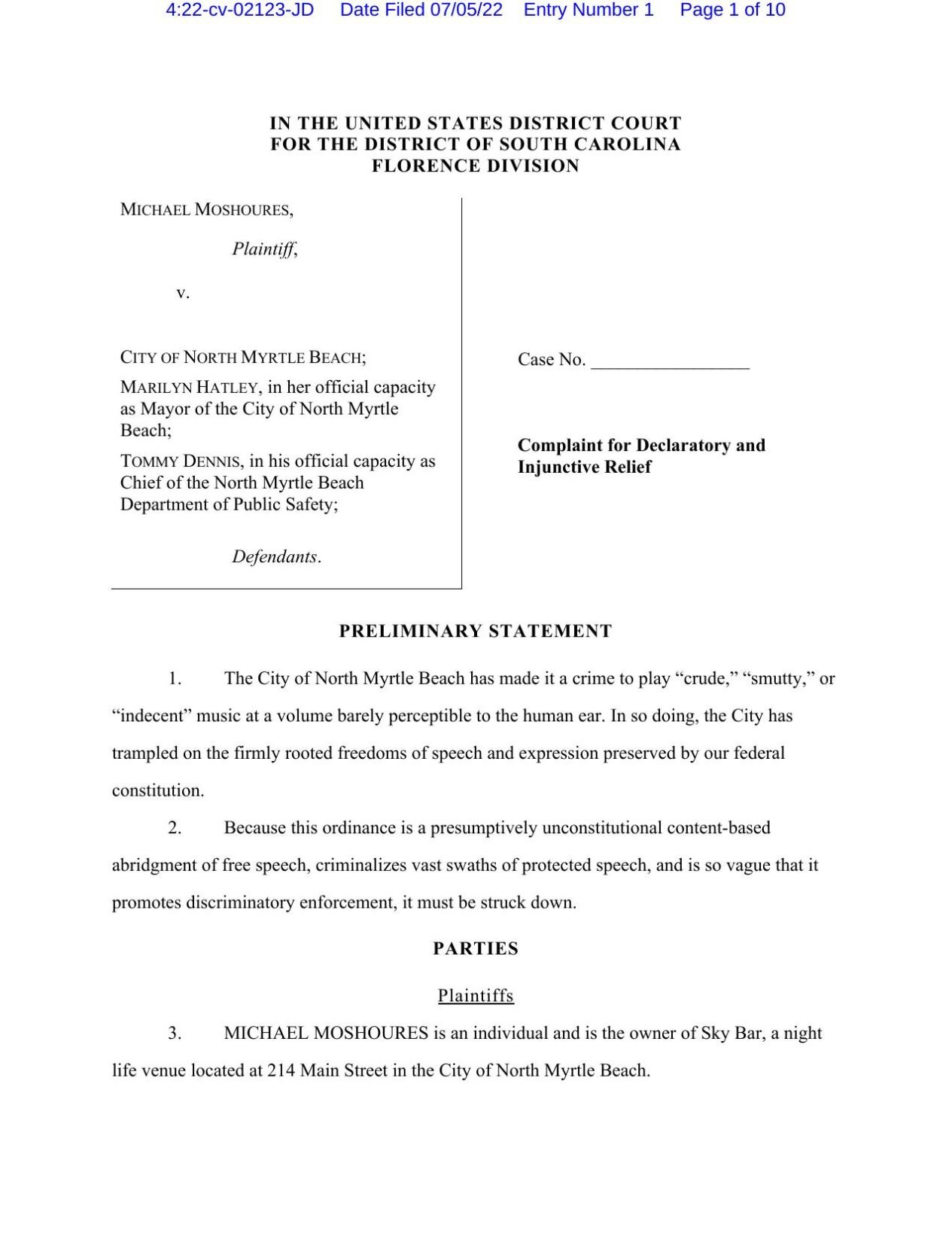 Now that’s a tough one to navigate through. I see both sides have a valid argument. Should be an interesting trial.