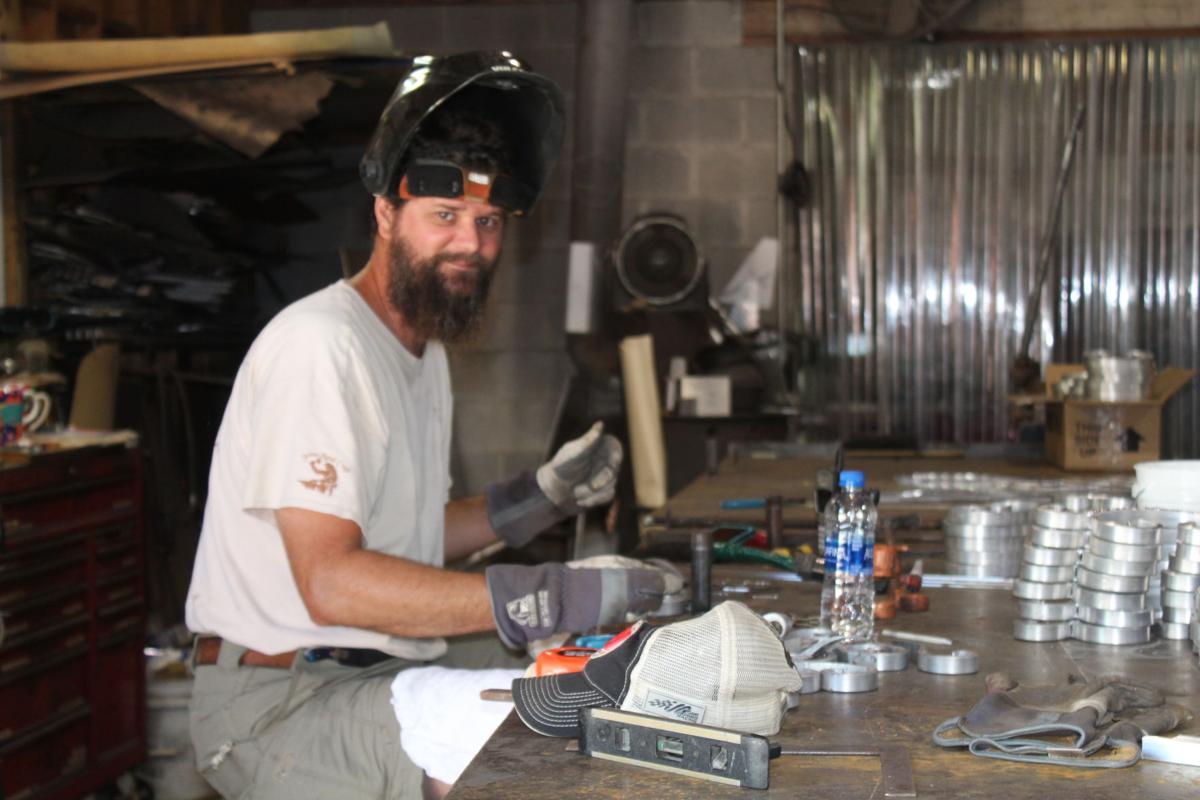 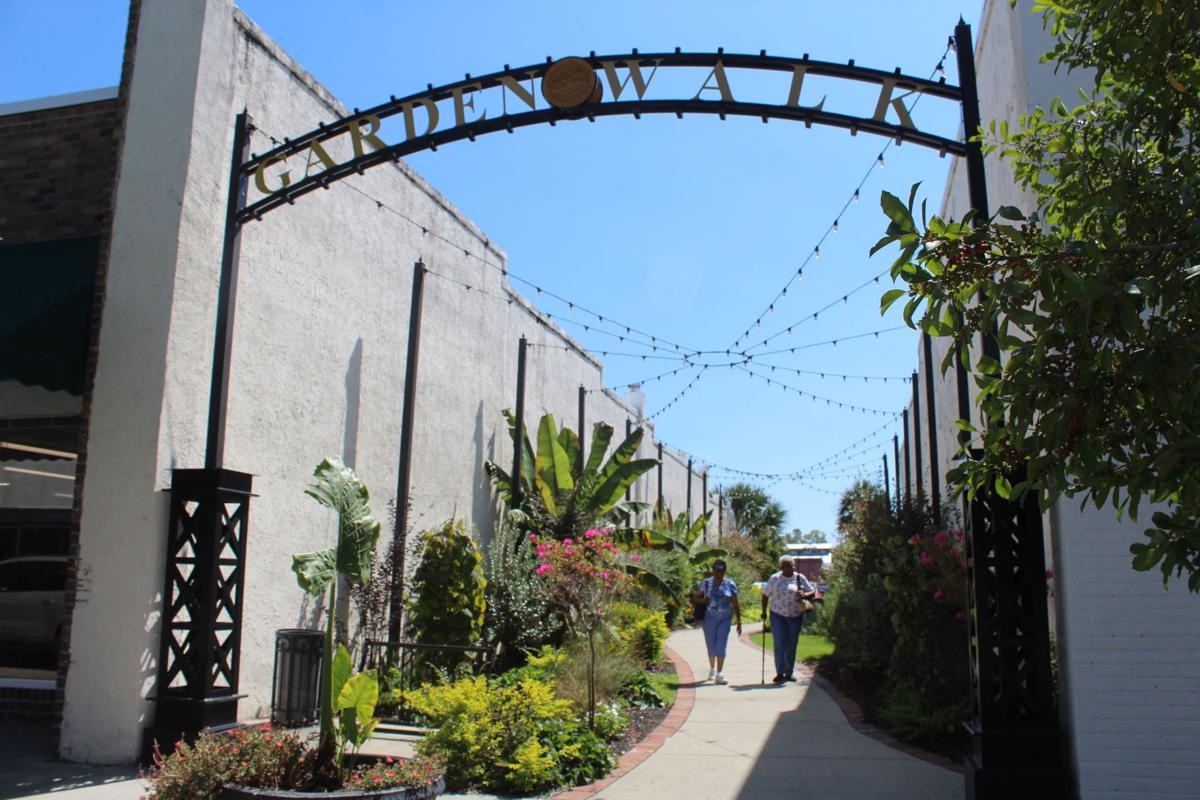 Danny Jones created this arch at the entrance to Conway's Garden Walk. 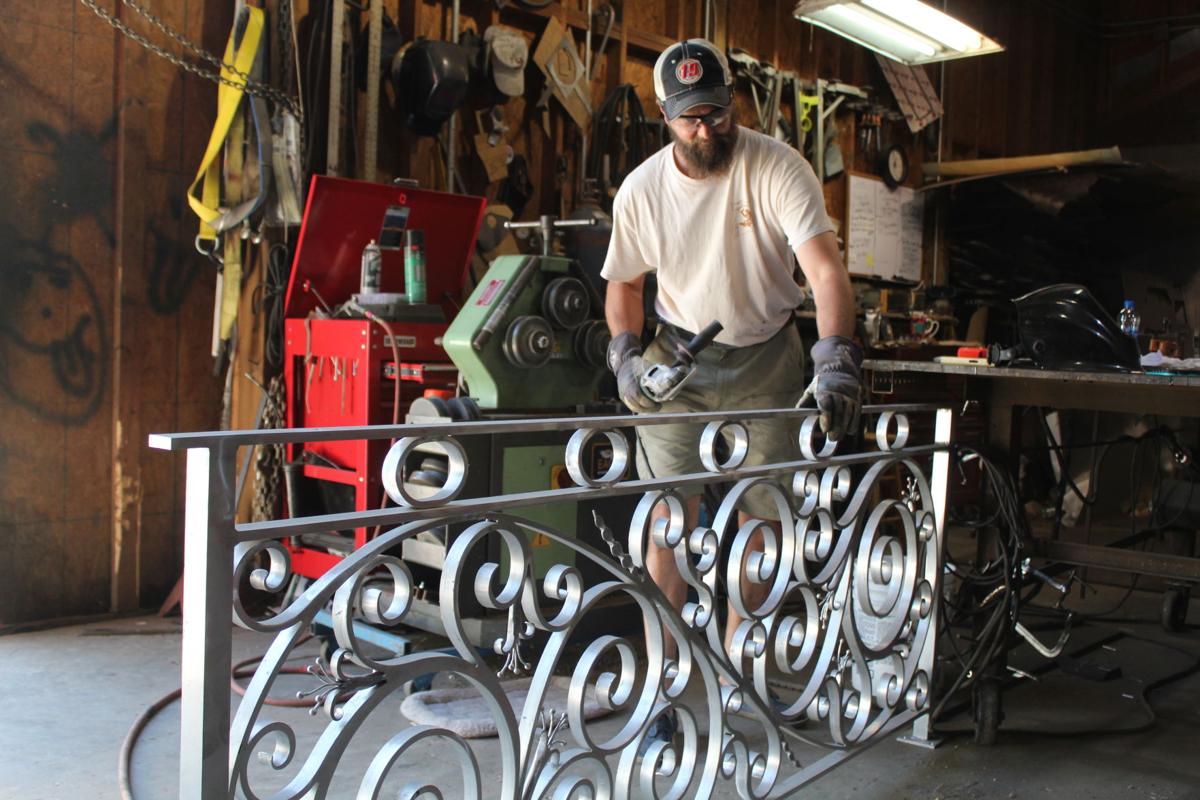 Danny Jones created this handrail completely by hand for a Grande Dunes home. 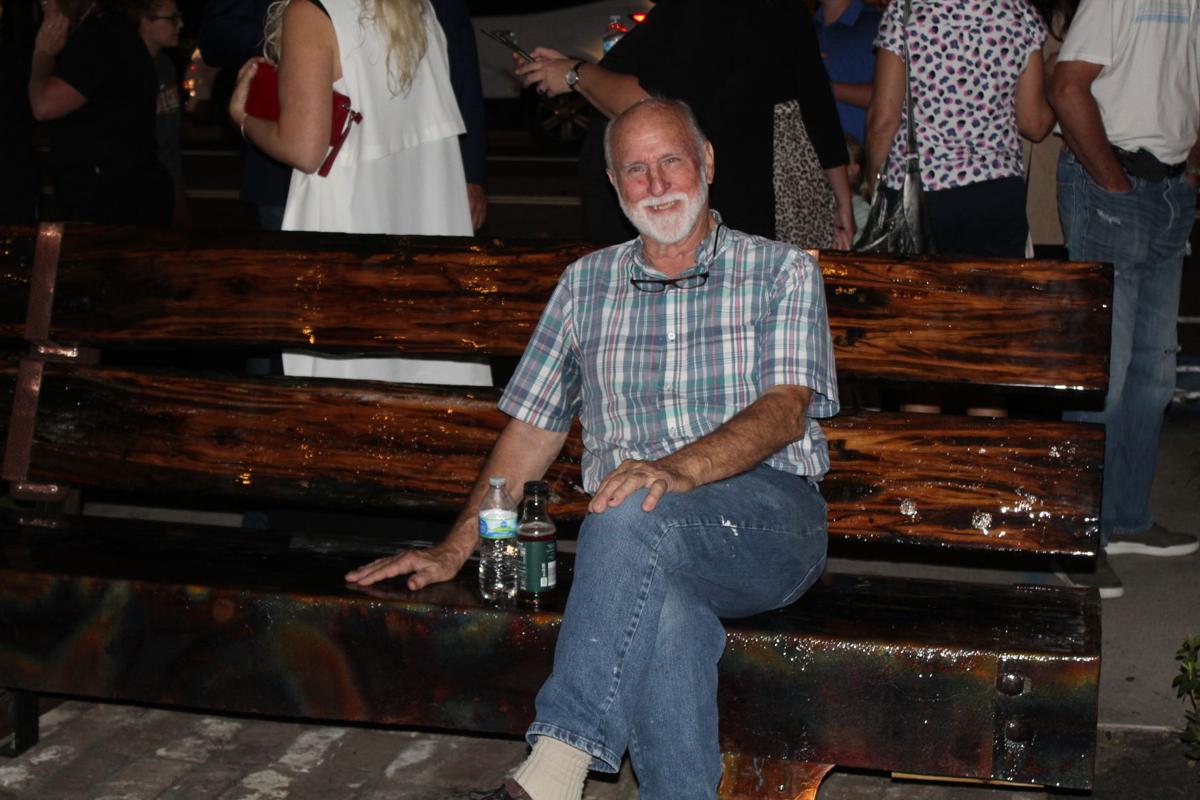 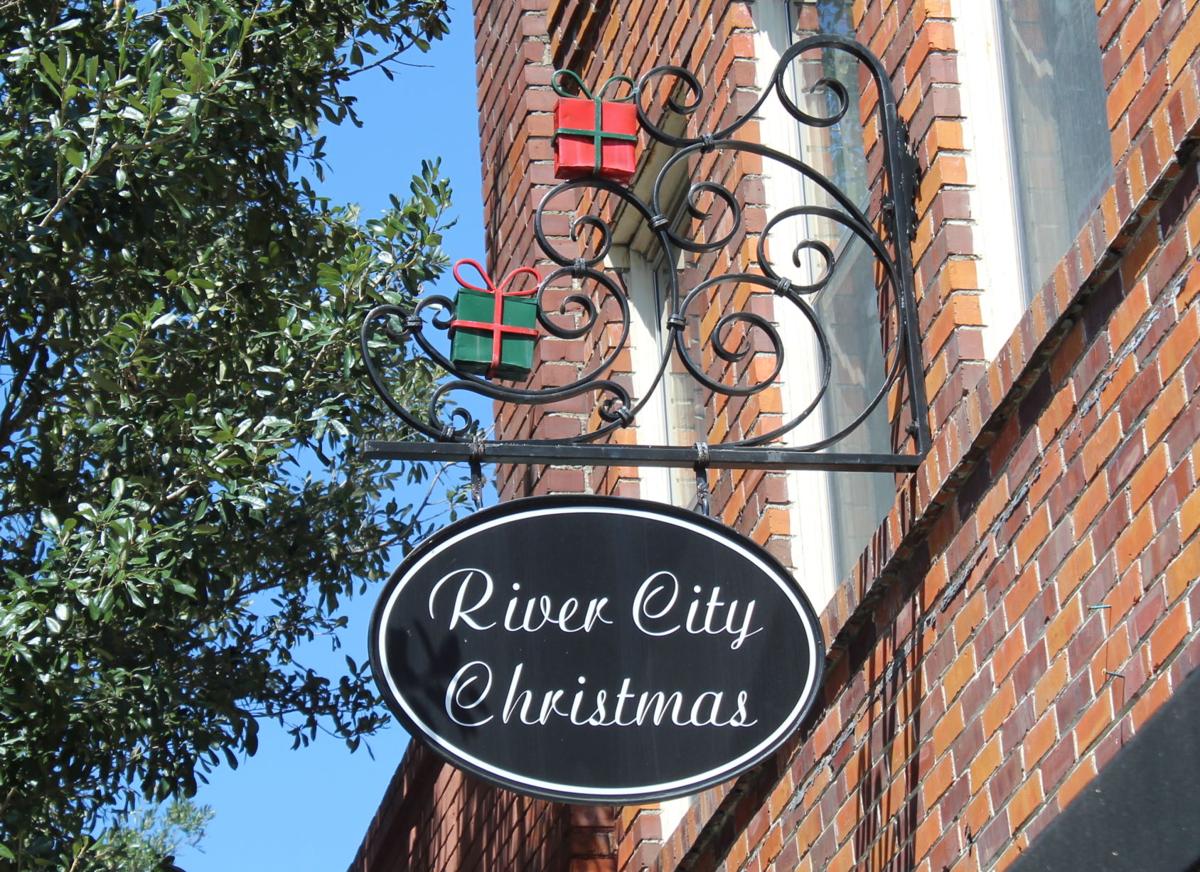 This "protruding" sign marking the location of River City Christmas was made by Conway blacksmith Danny Jones.

Danny Jones created this arch at the entrance to Conway's Garden Walk.

Danny Jones created this handrail completely by hand for a Grande Dunes home.

This "protruding" sign marking the location of River City Christmas was made by Conway blacksmith Danny Jones.

Conway blacksmith Danny Jones has been doing creative things with metal since his elementary school days when he remembers the fun of being a kid living at Pirateland Campground.

Jones says he and a buddy once strung around their wooded forts an alarm system made with string and metal cans that rattled and sounded the alarm when anyone came near. He smiles as he remembers that his dad didn’t fall for it, but his older brother did.

Now he’s gone on to much more sophisticated work with many of his creations adding special touches to Downtown Conway.

He’s responsible for some businesses’ protruding signs, the arch that marks the Garden Walk, the arch that welcomes folks to the new Kingston Park and the benches made from railroad products that guests at Kingston Park can relax on as they enjoy the park’s calming atmosphere.

Jones, who has been living in Conway since he was 13-years-old, says he’s been blacksmithing for about 19 years.

He doesn’t know exactly how or why he got started, but says, “I guess just curiosity, kind of a passion to want to learn how to move metal.”

He says he started doing small things; people saw them and wanted them.

“…then people would just see what kind of artsy stuff I did. They would want little handrails for their houses, small things,” he said, adding that the majority of his work now is handrails with a lot of demand for them coming from people building their homes up higher these days.

Jones began working with steel and copper, but now turns primarily to aluminum that he says can be more tedious than metal.

Pointing to an ornate handrail that’s headed to a Grande Dunes home, he said, “It takes a lot of time. All that’s done by hand.”

Jones says in his early days of blacksmithing he sometimes took whole weeks off driving around the area looking for buildings under construction. When he found one, he stopped to talk with the builders, handed out cards and brochures “and hoped I’d get some work. It’s really all you can do.”

Demand for his work took off in 2004 or 2005 when the big housing boom hit the area and lots of people wanted the kind of handrails he makes.

He’s feeling some competition now from handrail shops, but isn’t too concerned about it.

“I guess being in business so long, it does have its benefits…Plus if you do good work, word of mouth travels. I think the main thing is creating something that some people can’t create,” he said.

He gets a lot of satisfaction from believing that his work will be around when children of the homeowners he’s worked for are grown or when someone else buys a house he’s contributed to.

“That’s the main thing of creating something and having it stay around for years and years, or driving by and pointing to things and saying, ‘Look, I made that.’ I think that’s the most enjoyment. I’ve always wanted to build stuff and just kind of, yeah, I’ve always been kind of handy with drawing and creating stuff. I don’t know how; I just am,” he said.

Jones says he loves the conditions he works under, despite the heat his 2,800-degree welding machine can create.

He’s just not the right type to sit in an office, he said, and can only stay in his own office doing his paperwork for a few hours at a time.

He says he doesn’t think his work is hard, but it can be frustrating when things aren’t shaping up to look just like he wants them to.

Sometimes he just stops and thinks things over. He has even had times when he’s thrown things away and started over.

In his earlier days he did work in a blacksmith shop where a fellow craftsman showed him how to do some things, but mostly he says he just learned from there…”maybe more the school of hard knocks.”

He went with the basics and created his own style.

“You can’t really go wrong,” he said. “I don’t know that there’s really a right or wrong way with how to do art. It’s whatever’s in your head, you want to make it.”

Although he sometimes puts in 50 to 70 hours a week working in his shop that sits behind his home, he says he doesn’t really ever stop working.

Sometimes it’s in the middle of the night when he wakes up with some of his best ideas.

He compares his desire to create the same as some people’s love of fishing or hunting.

“It’s my fishing, my hunting. It’s something I enjoy doing…I love it. I don’t ever think of it as work,” he said.

It was the City of Conway’s arborist Wanda Lilly, who got Jones involved with the downtown arches.

She first approached him about crafting the arch for the Garden Walk and, because they wanted something similar at Kingston Park, made a second visit to his shop and then another when park designers began to envision original benches to put on either side of the arch.

Because the mural has a train theme, Jones came up with the idea of using railroad materials for the benches.

RJ Corman provided the spikes, ties and track for the beautiful and unique benches.

As for the park, Jones said, “Oh, I love it. I think it’s wonderful…It definitely makes Conway look more up-to-date.”

He also likes his contributions to the park, as does Lilly, who says she appreciates his willingness to be versatile and tackle whatever project they have for him.

“He is a metal fabricator and with the construction of the railroad tie benches he certainly was not in his realm and he was willing to go there and construct a real piece of art for the downtown that we would not have had if he had not been willing…The more creative things that we can add, the more interest we’ll have,” Lilly said.

Jones has also put his touches on some of the signs downtown since the city began allowing “protruding” signs. One is on Main Street marking River City Christmas.

His signs also once marked Crady’s and Crown and Country.

He’s still having strong thoughts about Downtown Conway. He hopes by next year to open a small shop where people can buy chairs, fire screens, fire poker sets, wood-burning stoves, kitchen tables, living room coffee tables, decorative panels to go in and on houses, pot racks, patio accessories and plant holders, hooks and some other hard to find things.

“Just put my kind of art stuff in it,” he said.

In addition to creating things, Jones offers basic welding, works on aluminum boats and now with a new plasma table he plans to start making signs.

Another thing he really likes is remembering his early days at Pirateland.

“It was great,” he said remembering how he and his friends rode their bicycles for miles, shot BB guns and fireworks.

In the summer, there were lots of kids to play with, many who came every year when they quickly rebuilt their friendships.

“It was a wonderful place to grow up in,” he said.