The AHS band during the state tournament last Saturday in Columbia. 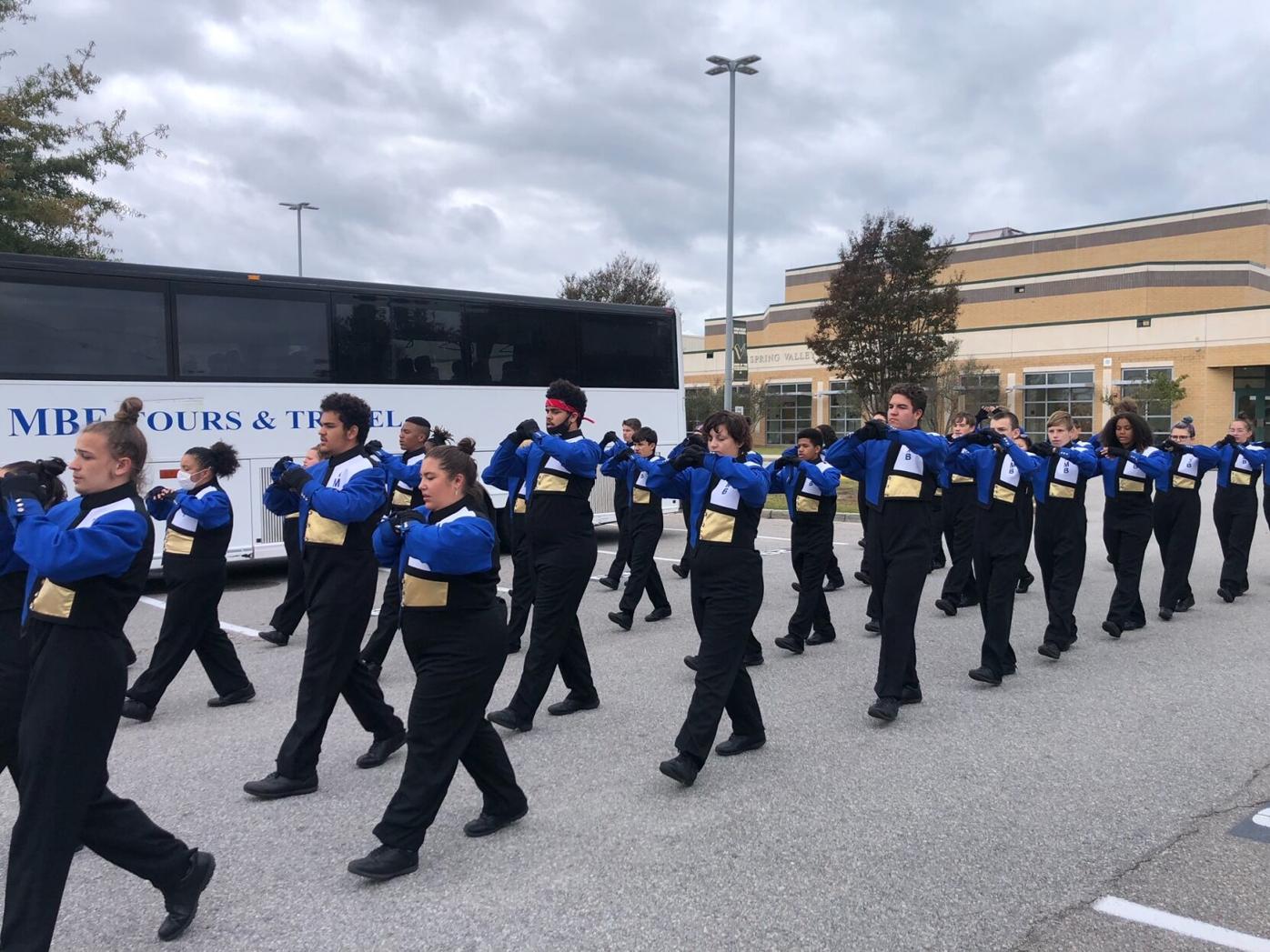 The NMBHS band gets ready for the state competition in Columbia last Saturday.

The AHS band during the state tournament last Saturday in Columbia.

The NMBHS band gets ready for the state competition in Columbia last Saturday.

After a year of canceled camps and sporadic quarantines, Aynor High School and North Myrtle Beach High School marching bands beat the odds to make it to the state band championships in Columbia on Saturday.

“Last season they couldn’t march at all - it really sucked the life out of the fun part of band,” said Samantha Slapnik, parent of senior NMBHS band member Jacob Slapnik. “They’re amazing - band kids are my favorite kids. It’s truly a team sport - it has to be everybody working together all the time.”

“They had a great run, I thought they played really well. They were happy with their performance but a little disappointed with the result,” DiLeo said. “It was a great experience. We’re ready to do it again next year.”

DiLeo is in his fifth year of directing the NMBHS musicians.

With 70 band members including 15 middle school members that were selected to go along, the band performed a medley of songs in the theme of “Til Death Do Us Part.” DiLeo said the music was their interpretation about what might have happened to Romeo and Juliet after their deaths.

“They worked really hard,” DiLeo said. “We had no idea what this season was going to be like, and 60-70% of my band had never been to a competition before. Even the kids last year didn’t get to compete.”

The upperclassmen were the only ones to perform in competition prior to Saturday, DiLeo said.

“It was a brand-new experience. They worked really hard and achieved that goal,” DiLeo said.

Slapnik said her son enjoys band and the spirit of competitiveness at the finals.

Their family was in awe of how the North Myrtle Beach community rallied around the band and helped with last minute fundraising to get them there.

“We forget we live in a small town because we have so many big city amenities,” Slapnik said.

AHS band director Mark Mendez said his band received a 10th place rating in music, but 14th overall, and that was a really good thing for them.

“That’s a big deal,” Mendez said “Our ranking was 16th going in. We jumped two spots in a week. [That is difficult to do] because everybody else is practicing just as hard as you are.”

Mendez said the neatest thing about their accolades is that they were awarded to Aynor's more “old school” band that doesn’t use props or fancy effects.

“We don’t do any bells and whistles and crazy electronics. We’re more of a traditional marching band from 30 years ago,” Mendez said.

Mendez, who has been band director there for 25 years, agreed with DiLeo that it had been a tough year.

“We had 50% of the band out at one time, and the second week of band camp got canceled,” Mendez said.

The AHS band has 58 members, including eight middle schoolers and only seven seniors.

Eighth-grader Wyatt Johnson was one of those middle schoolers who got the opportunity to compete with the high school band.

“AHS marching band has been hard work but it has been worth it. It was amazing to play next to other great bands across the state. I’ve made some of the best friendships,” Johnson said.

Their competition music was a "British Invasion" show, Mendez said.

“Queen, Elton John, some Beatles. It was a rock show and it was lots of fun – a great crowd response,” Mendez said.

Mendez said he was ecstatic with the band’s performance.

“One of the most satisfying things is the fact that we did this – we were just hoping every week we wouldn’t get deemed with a positive case,” Mendez said. “It was just this awesome feeling that we were able to set a goal and get it accomplished, and I hope the kids remember that. It’s not really what happens but how you react to what happens. You just keep pushing … keep chipping at it and it will eventually fall the way it’s supposed to.”

AHS senior drum major Reagan Floyd said being able to participate in the state competition meant a lot to her, and to the other seniors.

“I didn’t get to march my junior year,” Floyd said.

Mendez said he hopes working toward a state championship becomes a normal thing, he said.

“Like an expectation we’re trying to meet every year,” Mendez said. “It was very satisfying to be able to have this kind of achievement with the kind of setbacks we had all year long,”

All nine Horry County high school marching bands will be performing tonight at 6 p.m. at St. James High School for the HCS Marching Band Extravaganza. The event is free to the public.