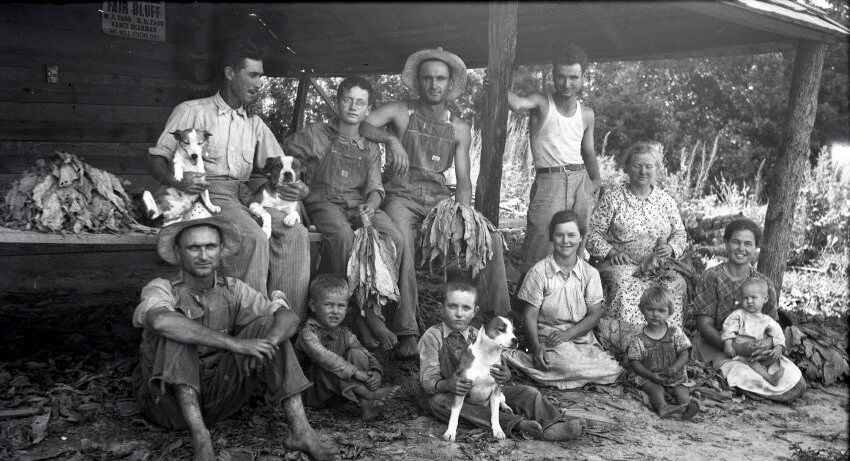 Photos are from the William Van Auken Green Collection. He was a photographer that took pictures in the Aynor/Galivants Ferry area in the 1930 and 40s. This is the Rabon family from Aynor. 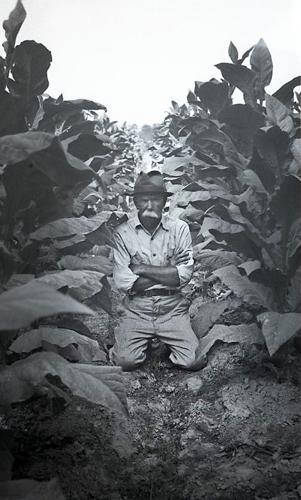 Photos are from the William Van Auken Green Collection. He was a photographer that took pictures in the Aynor/Galivants Ferry area in the 1930 and 40s. The people in the photos are unknown. 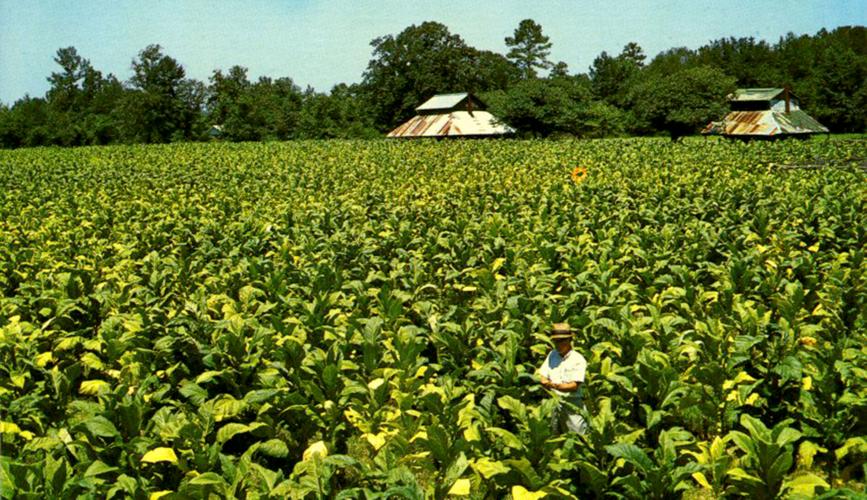 This is a post card of John Monroe Holiday of Galivants Ferry standing in his tobacco field. The date it was printed is unknown, but it was printed by Plyer-Brandan in Myrtle Beach. 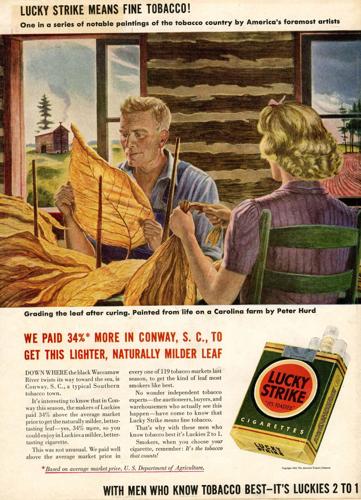 Photos are from the Horry County Museum 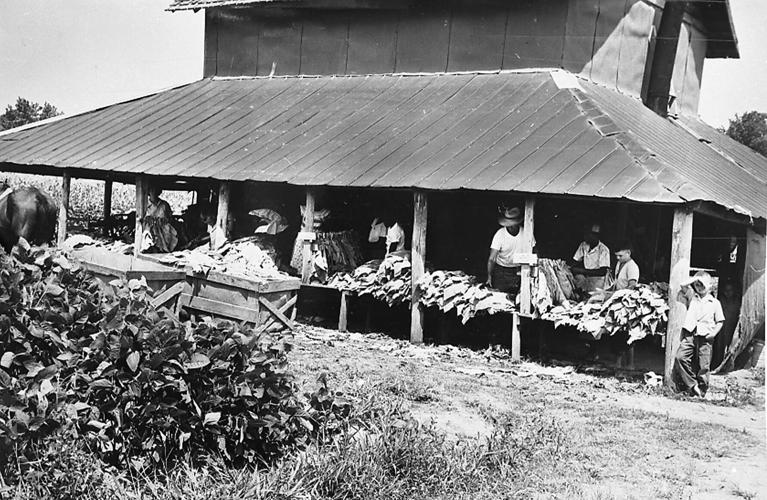 Photos are from tobacco farms in Horry County. Photos provided by the Horry County Museum 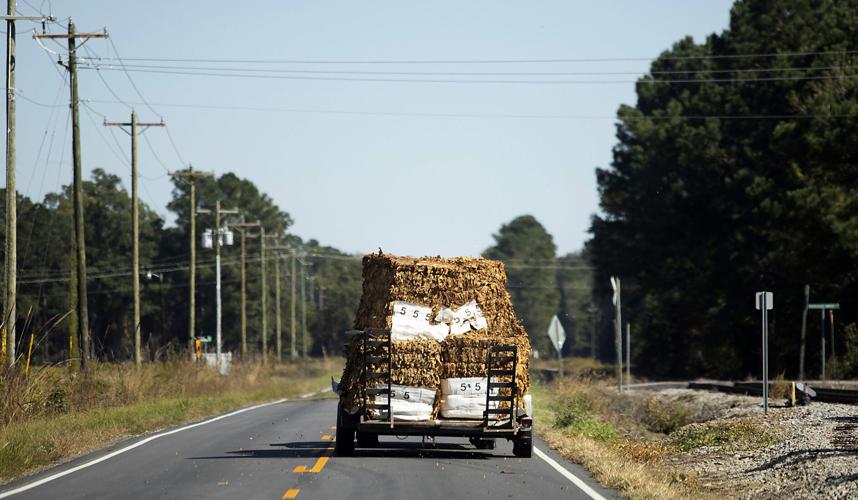 A truck of tobacco on its way to a local warehouse. Photo by Janet Morgan/janet.morgan@myhorrynews.com

After days and days of heat in the tobacco fields, farmers saw the real magic happen in the warehouses across Horry County.

Farmers would bring their bales of tobacco, which were lined up and down the warehouse. Auctions began at the end of July and closed in the fall.

“We had a hell of a good time,” said Jesse Hodges, former owner of the New Farmers Warehouse in Conway.

Buyers were bidding about half-a-million dollars worth of tobacco over a 2-hour period, he said.

Hodges liked to sell 600 piles of tobacco an hour. One pile of tobacco could go up to 250 pounds, but some could be lighter around 100 pounds. And $2 a pound was a “very good price,” he said.

“During the battle, it was hot,” Hodges said. And not just the temperature in the warehouse.

'It's in our blood': Aynor tobacco farm predates Civil War

Ahead of the sale, government graders would place a grade on each pile — a guarantee that the pile would sell for at least that grade, Hodges said. The grades included a number and letter.

“As you came up the plant, your quality increased,” Hodges said.

The plant is harvested in sections, with the top holding the most nicotine, and therefore the most expensive.

Hodges referred to his career as a “high-speed broker.”

Warehouse auction days in the 1990s, ‘80s, ‘70s and well before then were such a production. So much so that the local chamber of commerce would often bus tourists to the warehouse to see the experience.

“It was very much a sight for people who had never seen it,” Hodges said.

The warehouse days during the height of tobacco in Horry County not only filled the pockets of farmers, but it also paid the merchants in town — some of whom the tobacco farmers had bought items on credit to create a bountiful crop.

‘I miss everything about it’

Those warehouse auctions came to a screeching halt after the 2004 mandatory buyout.

It was a bittersweet time for tobacco growers — each would receive a yearly stipend for 10 years, whether or not they decided to continue to grow. But for warehouse owners, that was it.

“It would upset anybody to know somebody was going to take away your living,” Hodges said. “I miss everything about it.”

The Tobacco Transition Payment Program, stemming from the Fair and Equitable Tobacco Reform Act of 2004, ended the tobacco-quota program and caused producers to transition to the free market, according to the United States Department of Agriculture.

Farmers could continue to crop tobacco — but now had to turn to the private companies under contracts. It ended tobacco farming careers for many farmers, especially those who were already close to retirement age.

Farmers now bring their bales of tobacco during their appointment time and are given market value, instead of a sometimes higher-than-expected price they could have received at an auction.

At one point in history, tobacco became the salvation for the region as the price of cotton had fallen low. And before that, tobacco sold for its weight in silver in London.

But then came one expensive crop to grow that nobody else was growing: rice. At the time, mainly adult men were smoking — but everybody ate rice, Prince said. That’s when rice and cotton came into the region, and tobacco took a timeout.

As cotton became the king because it can grow almost anywhere, it actually didn’t become a lead crop in Horry County.

Specifically in the county, the area saw the rise and fall of the lumber and turpentine industries. But those industries didn’t last forever.

Around that same time, right before the turn of the twentieth century, cotton prices were falling. In Horry County, the trees being used for timber and turpentine were gone or dead.

And then tobacco was back.

What brought it back to South Carolina: cigarettes.

“It was perfect,” he said. “There was a need for a new crop.

“They looked at tobacco like ‘this is going to save us,’” he said.

In came the warehouses for auctions. All businesses were benefiting from the tobacco industry between about 1890 to 1910.

Problems began again in the 1920s with overproduction. In many places, the price went down, which was similar to what happened years before with the cotton industry.

Then there was the Great Depression.

“And then they are really in trouble,” Prince said of tobacco growers.

From vogue to vice

As prices collapsed, the farmers didn’t stop growing, which made it worse, Prince said. It was a vicious cycle.

“The only way to solve the problem was to balance supply and demand,” Prince said, adding that the federal government was the only one that would be successful in that.

The allotment program took historic production from previous years, averaged it and reduced it by about one third, Prince said. Farmers were then only able to farm the acres they were allotted by the government.

“It was an excellent program and it saved the tobacco growers,” he said. “Good times roll.”

As farmers began to make money, some doubling their income, their allotments increased because of demand due to the war and more women beginning to smoke.

But then another slow decline began. This time for a new reason: tobacco’s links to health problems.

“At one time, smoking was thought of as like the cool, fashionable thing to do,” he said.

By the 1980s, smoking on airplanes and in restaurants began to be restricted.

It devolved from vogue to vice, Prince said.

At the same time, tobacco companies began to foster in other countries like Brazil, Asia and Africa because it could be purchased cheaper.

Both reasons — people quitting smoking and companies buying in other countries — were forces working against American tobacco farmers, Prince said. The decline didn’t happen overnight, he said, adding that it took about 20 years. Farmers’ allotments were cut. There was political pressure. And people began to ask why the federal government should support a crop that harms people, Prince said.

“Where’s the morality in that?” Prince said.

The final dagger was arguably put into the tobacco industry through the mandatory buyout program in 2004.

Since the buyout, the government has been restricted from promoting anything related to tobacco.

In South Carolina, the Tobacco Board aims to support tobacco farmers and keep the industry alive. The seven-member board works with the South Carolina Department of Agriculture to support farmers.

“All of those seven members are producers or tobacco growers, said Katherine Helms, tobacco promotion marketing specialist with the SCDA. “Their main thing is they are there to support the tobacco industry.”

The tobacco board is grower-funded and 30 cents per 100 pounds of tobacco sold goes to the board, Helms said.

“With that money we collect, we do research with tobacco,” she said, adding much of the research is done through the Clemson Extension. The board funds research that helps the tobacco industry understand better leaf quality, better color and yield, Helms said.

Horry County has been a top tobacco producer in South Carolina. The county’s tobacco history can be seen in fields where old pack houses and tobacco barns still sit in the rural parts. And even in the cities where warehouses used to be, though other businesses use the warehouses differently now.

The industry may have changed through the years.

But one thing remains the same: the sweet smell of tobacco and its unforgettable aroma.

To read more stories from the Harvesting History special project by My Horry News, visit www.myhorrynews.com/harvesting_history.

Hemp farmers, processors and handlers can soon apply for permits for the 2022 growing season.

Hannah Strong Oskin is the managing editor of My Horry News. Born in Conway, Hannah grew up in Pawleys Island and is a graduate of Winthrop University.