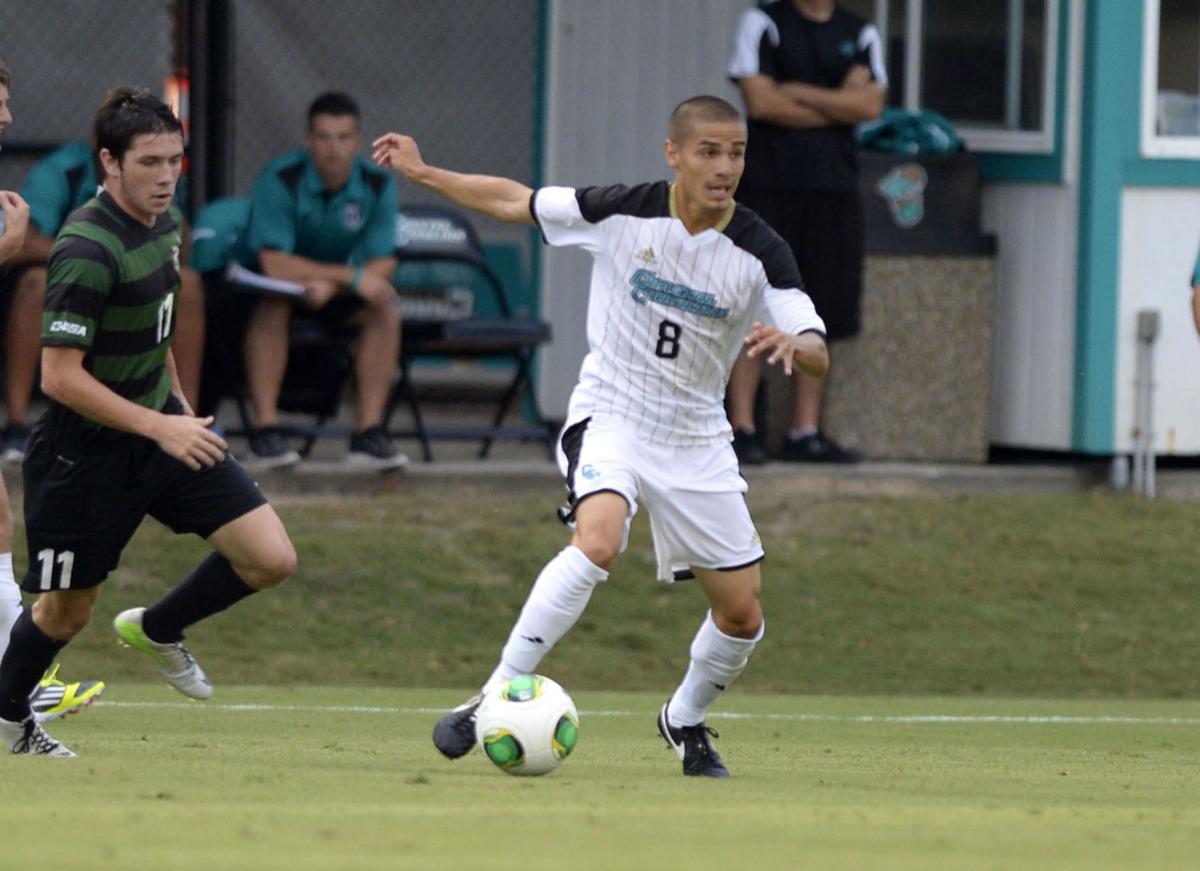 Justin Portillo looks to help lead Real Salt Lake to a title in the MLS is Back Tournament. 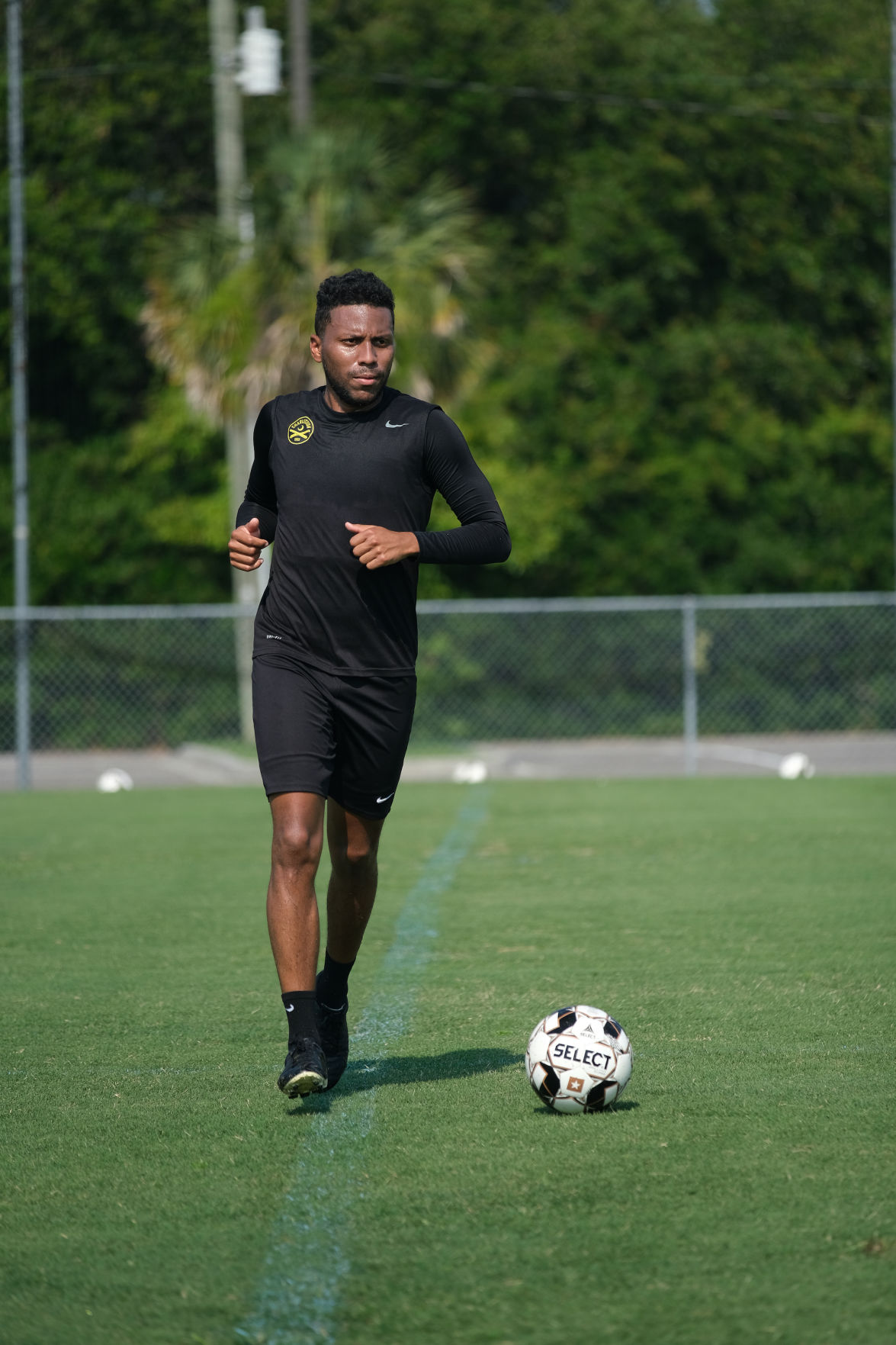 Romario Piggott scored six goals and recorded two assists in his lone season with Coastal in 2017. He looks to have a strong outing for the Battery when their season kicks off Sunday, July 19 at Patriots Point Soccer Complex.

Justin Portillo looks to help lead Real Salt Lake to a title in the MLS is Back Tournament.

Romario Piggott scored six goals and recorded two assists in his lone season with Coastal in 2017. He looks to have a strong outing for the Battery when their season kicks off Sunday, July 19 at Patriots Point Soccer Complex.

The 25th season for Major League Soccer (MLS) was not expected to go this way. No sports league’s season was.

And yet on March 12, America’s men’s and women’s professional soccer leagues, along several other sports leagues around the world, suspended their seasons because of COVID-19.

The NBA and NHL seasons came to a halt, while MLS and United Soccer League (USL) saw their seasons stall after only starting at the end of February.

“It was incredibly tough,” said Romario Piggott, midfielder for the Charleston Battery and former member of the Coastal Carolina men’s soccer program. “It was upsetting for it to stop so soon, but we are soccer players for two hours out of the day. This virus was not just affecting us but everything else from business to people’s livelihoods. So, it was tough when the league had to stop, playing but this was bigger than soccer.”

Piggott scored three goals for the Battery last season and recorded three assists as well, good enough for third best on the team. The former Chanticleer made 21 starts in 26 total appearances for the club.

Piggott, who is originally from Panama, said while it has been an adjustment with the social distancing guidelines and changing up the way the team trains, he is more concerned about his family back home.

“I am going to be fine,” he said. “In Panama, the whole country shut down. Business shut down and so many people lost their jobs. I am more bothered by that than what I am currently dealing with here.”

After many months of discussion and careful planning, some sports leagues have made plans to resume or begin their seasons. After 108 days of no professional sports in the U.S., the National Women’s Soccer League (NWSL) begin their season with the opening of the NWSL Challenge Cup on June 27.

The return of professional soccer in the U.S. makes players like Piggott and former CCU star in Justin Portillo excited to return to some sense of normalcy.

“Being away from the game for such a long time has been weird, especially during this time of the year,” said Portillo, who played for CCU from 2010 to 2013. “Everyone is excited to be able to compete again.”

Portillo has experienced success in recent years out west with MLS club Real Salt Lake. He was a part of the farm club, Real Monarchs in the USL during the 2018 season. He saw some MLS action during the 2019 season but spent a majority of 2019 with the Monarchs, eventually helping lead the Monarchs to a USL Championship at the end of the season.

“A lot of guys on the Monarchs were really excited to come back this year and defend a title,” Portillo said. “For this pandemic to happen right as the season was getting underway, it certainly was tough.”

While Portillo has spent the majority of his time the past two seasons with the USL club, the organization selected him to be a part of Real Salt Lake’s return to MLS in the MLS is Back Tournament that starts on Wednesday.

“I think once we get there, everyone on our team is OK and tests negative, I feel like we will be pretty safe,” Portillo said. “We really cannot leave our hotel rooms except for training and for matches. It is a weird situation, being in that bubble the MLS has us in, but as long as everyone follows those guidelines, I think we will be safe.”

While it appears that the MLS's Back Tournament will go on without fans in attendance, the USL might be one of the first leagues to see some fans return.

On June 22, Kentucky Gov. Andy Beshear announced his approval of a plan allowing up to 50% capacity at Lynn Family Stadium, the home of Louisville City FC, another USL club.

According to a release put out by the club, the plan calls for temperature screenings, mandatory face coverings and proper physical distancing while at the stadium.

While things might be shaping up over in the Bluegrass State, here in South Carolina, where cases of COVID-19 have been on the rise in recent days, Gov. Henry McMaster is poised to withhold the return of sporting events with fans in the Palmetto State until the threat of coronavirus has decreased substantially.

The Battery, who play their first two matches of the USL restart at home at Patriots Point Soccer Complex in Mount Pleasant, acknowledged the governor’s concerns when they released their schedule on July 2.

“Out of an abundance of caution, we have decided to play our first two games in July without fans in attendance,” the Battery said in a release. “As the season unfolds, we will assess conditions and make the appropriate decision in collaboration with local authorities regarding opening doors for the remainder of the season. As excited as we are for our fans to experience our new home at Patriots Point, safety will remain our top priority.”

“It is going to be a hard task to do, but at the same time gives hope to us,” Piggott said.

On June 26, the USL announced that the league’s 35 clubs were to be split up into eight groups based on geographic location. The clubs will play a 16-game regular season over the course of 13 weeks, with the regular season ending over the first weekend in October.

The top two teams from each group in the regular season will advance to the 2020 USL Championship Playoffs, producing a field of 16 teams overall in a regionalized single-elimination bracket. Group winners will be paired with group runners-up in the Round of 16, with home advantage being determined by record for the remainder of the bracket.

Charleston is in Group H and will face off with Atlanta United 2, Miami FC and Tampa Bay Rowdies.

“We are really excited to be back,” Piggott said. “We are very confident going into this group, but we know it is going to be tough. Tampa was one of the top teams last year. That’s the team to beat in the group. We have to be prepared for every single game.”

Charleston will restart the 2020 USL season at home on Sunday against Birmingham Legion FC.

As for MLS side of things, the 26 clubs were separated into six different groups. Five groups featured four teams each, while one group has six teams. The top two teams in each group will advance to the knockout stage, besides Group A, which will have the top three teams advance. The five third-place teams (and one fourth place team) will be placed in the wild card group. Of those six teams in the wild card group, only three will move on to join the other 13 in the knockout round.

“There is not one group that I looked at in this tournament and felt that it was an easy group,” Portillo said. “This will be a big shake up for the league. Colorado started off great this year. Minnesota has greatly improved over their time in MLS. Kansas City has always been a top team the past few seasons. We have our hands full but we will be ready.”

Real Salt Lake will open the 2020 MLS is Back Tournament with Colorado on Sunday. Kickoff is schedule for 10:30 p.m.

There has been a recent major shakeup in the MLS is Back Tournament with FC Dallas withdrawing from the competition after 10 players and a coach tested positive for COVID-19. The MLS has said that it plans on going forth with the tournament as scheduled.