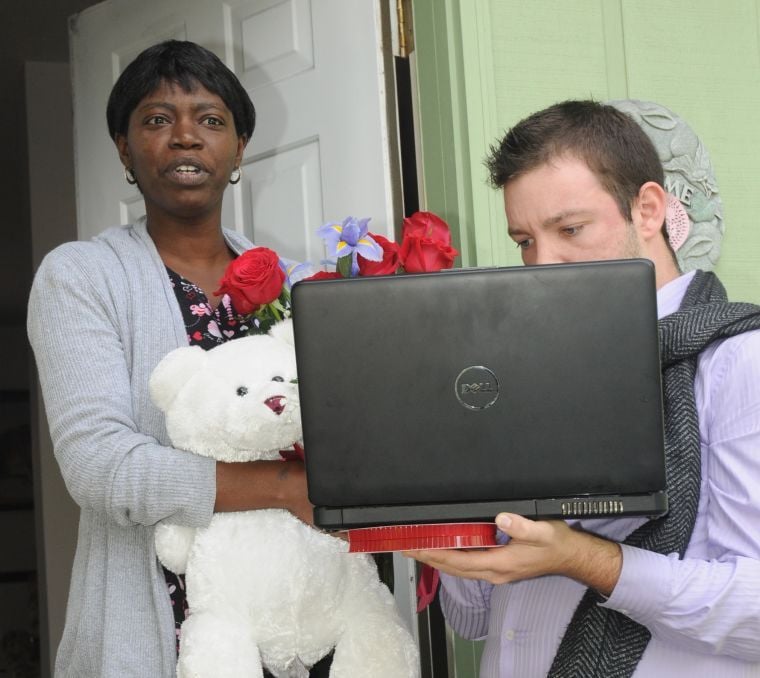 Vernita Dotson shows her surprise as she gets a marriage proposal from her boyfriend, who is in the military stationed in Kuwait. 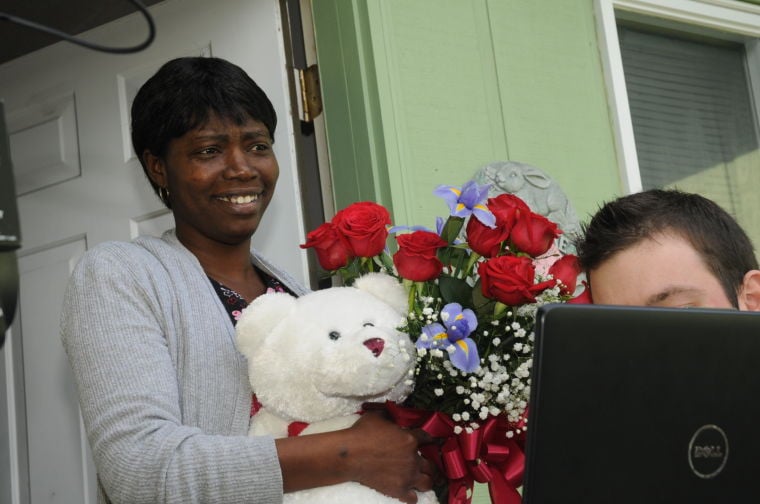 Vernita Dotson clutches her teddy bear and flowers as she watches a marriage proposal from Anthony Moody, expedited by David Kinard of the Daisy Fair Florist. 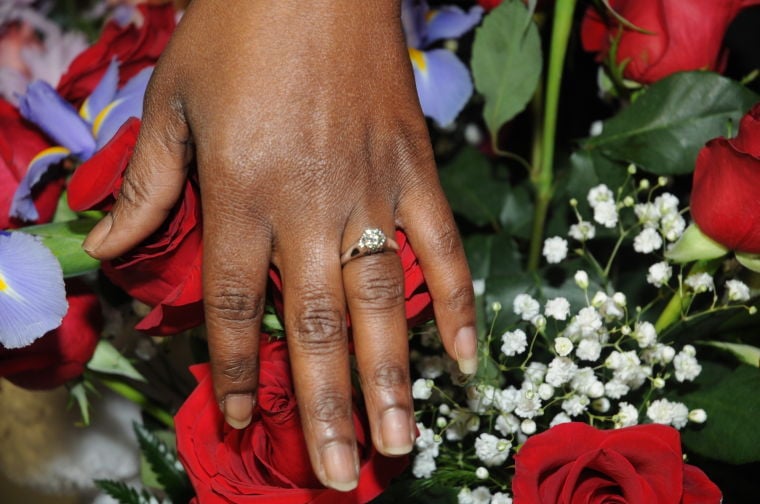 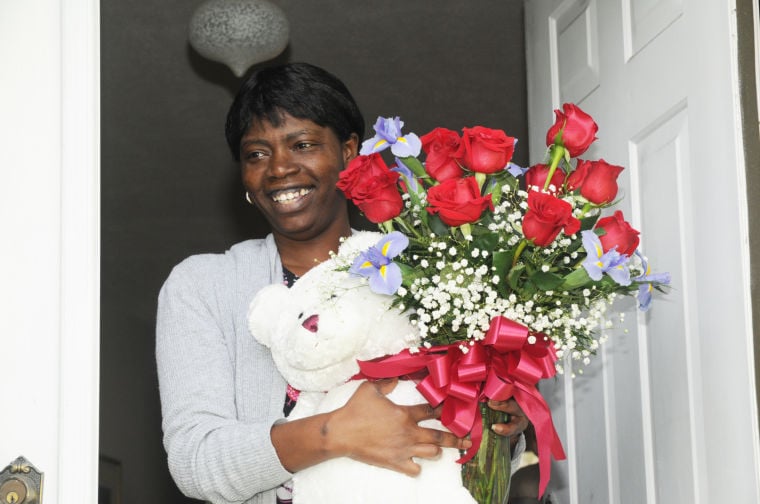 Vernita Dotson shows her surprise as she gets a marriage proposal from her boyfriend, who is in the military stationed in Kuwait.

Vernita Dotson clutches her teddy bear and flowers as she watches a marriage proposal from Anthony Moody, expedited by David Kinard of the Daisy Fair Florist.

Two oceans and 7,000 miles didn’t stop Anthony Moody from telling his Valentine he loves her and wants her to be his wife.

Vernita Dotson, now his bride-to-be, didn’t let total shock stand in the way of saying “yes, yes, yes” to his long-distance proposal after pulling an engagement ring out of the center of a box of chocolates.

Moody also sent along red roses and a teddy bear to help seal the deal.

The U.S. Army soldier, currently deployed to Kuwait in support of Operation Enduring Freedom, actually had lots of help from home to pull off his proposal.

Much of it came from his sister Tricia Moody and David Kinard at the Daisy Fair Florist in Conway. Kinard first set the date for the proposal for Wednesday, but a last minute glitch caused it to be postponed to today.

Tricia Moody said the first idea she and her brother had was to buy a greeting card and record his voice on that, but the plan grew to a video proposal delivered on Kinard’s IPad.

Dotson, a certified nursing assistant, works through a private company that offers home health services. She was sitting, coincidentally in a nursing shirt covered with hearts, when the entourage appeared for the proposal.

Arrangements had been made ahead of time to be sure it was okay with her patient and his wife for them to go to their Conway home.

When Dotson first saw all the people and the flowers, she said she thought she had won the Publisher’s Clearinghouse.

Moody had his fiance’s ring custom made and sent it to Conway by Federal Express. Tricia Moody picked it up and took it to Kinard to be placed in the box of chocolates.

She described the ring as having a carat diamond with Moody’s birthstone under the bridge.

She says her brother is a laidback kind of guy, who likes to be different and chooses not to do anything small.

“He likes big, out of the ordinary things,” she said.

She said her brother played saxophone in the Green Sea Floyds High School band and joined the military hoping to play in the Army band.

“I think he’s done everything but the Army band,” she said.

Through emails, Moody said he and his betrothed have been dating for more than 10 years, but his constant moving and military deployments made him hesitant to commit to Dotson.

“I did not want her to bear the hardship of military life,” he said. “I have been in the Army for 15 years and saw the emotional toll that military service places on families. Vernita has stuck by me and this proposal is way overdue,” he wrote.

Moody, also a graduate of the University of Phoenix, says he was attracted to Dotson’s smile and personality. He describes her as very warm and caring.

“Vernita is wonderful,” he wrote. “She has embraced my children as her own. This woman has stuck with me through some really hard times and has been my rock for the last 10 years. She has supported both my personal and professional goals, at times sacrificing her own. Plus she can cook, so I figured, yeah, I better keep this one (lol).”

Tricia Moody is also a big admirer of Vernita, describing her as funny, with a good sense of humor and coffee crazy.

“She loves coffee,” she said. “The day does not get started unless she has a cup of coffee in her hand. She’s laidback, too.”

Kinard said at first he was hesitant to get involved in the proposal, not completely understanding the situation. However, when Moody’s family explained it to him and he emailed Anthony several times he began to get excited about it.

The only problem is he had to do it on one of his busiest days of the year. He expected to deliver 3,000 roses on Wednesday and today and more cut flowers than that.

Once he became sold on the proposal he wasn’t about to turn back.

“I think it’s awesome,” he said. “We don’t get these very often and especially what made it better, I thought, is first of all, it’s modern-day technology paying off, and second of all, it’s just a feel good thing.

“Valentine’s is always known for love in the air and to have this happen, I think it’s pretty awesome.”

Moody says he’ll spend five more years in the Army and then retire. He’ll be home from Kuwait in June and the couple is already planning a June wedding.